Base configuration only available “while supplies last" 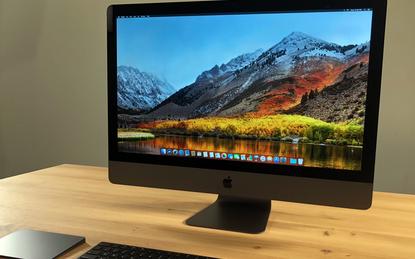 After cutting some configurations of the 21.5-inch 4K iMac, Apple has now discontinued production of the iMac Pro, adding a note to its site that the high-end all-in-one is only available “while supplies last” and removing all configuration options from its online store.

Once hailed as the fastest Mac available, the iMac Pro arrived in December 2017 as a super-high-end iMac for professionals. At the time, it was faster than the Mac Pro with a built-in 5K display, 32GB of RAM, and an 8-core Xeon processor. It was also the first and only iMac with a Space Gray enclosure. It was updated in August with a 10-core base option but otherwise remained unchanged since its launch.

Rumours have been swirling for months that a fully designed M1 iMac is on the way with a Pro Display XDR-style aesthetic that eliminates the giant chin, trims the bezels, and possibly brings additional colour options. There haven’t been any specific rumours about the iMac Pro, but we assumed it would get a refresh alongside the other models.

Now that theory seems less certain. The speed of the M1 processor could eliminate the need for a Pro model or Apple could have a new high-end iMac planned. Since Apple doesn’t break out individual sales, we don’t know how well the iMac Pro sold, but it likely represented a small fraction of overall iMac sales.

While the iMac Pro’s discontinuation doesn’t necessarily signal the arrival of a new M1 model, it adds one more piece of evidence that Apple is planning to launch a new iMac very soon. At any rate, if you want an iMac Pro, you should probably buy one before it becomes a collector's item.