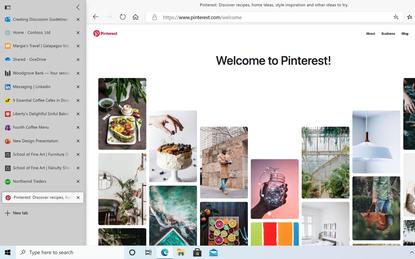 Microsoft is adding new security and usability features to Microsoft Edge, complementing the vendor's rebranding of its Office 365 suite for consumers into Microsoft 365.

Redmond plans to add three key improvements over the coming months: an automated password checker that will try to determine whether your password has been leaked to the web, an arrangement of vertical tabs, as well as taking the Collections arrangement and merging it with the mobile apps.

While Collections is unique to Edge, the other capabilities have been offered by other browsers.

Google, for example, will alert you if it detects that any of your passwords stored in its browser vault have been published to the web as part of a site hack, and will encourage you to change them. Edge—what used to be called the “new Edge,” and now is just Microsoft Edge—will do the same.

Edge’s new capability will be part of “Password Monitor,” a feature that will be accessible via the Edge’s Settings menu. Microsoft didn’t say what it was using as a source of information about leaked passwords, but HaveIBeenPwned and similar sites provide such leak-monitoring services.

Microsoft is also taking a page from Mozilla Firefox and some other browsers by adding a vertical tab arrangement to its browser configuration options. Microsoft showed off the new vertical arrangement on the left-hand-side of the screen.

While other browsers have used a “sidebar” in conjunction with tabs to provide additional content, Microsoft has reserved the sidebar along the right-hand rail to house Collections. That may mean that vertical tabs will be confined to the left rail.

Collections, Microsoft’s nifty research tool, will migrate to the mobile versions of Edge later this spring, Microsoft said in a blog post. Moreover, users will be able to sync Collections across all of devices, Liat Ben-Zur, the corporate vice president in charge of Edge, wrote.

Finally, Ben-Zur highlighted the fact that the new version of Edge, like the legacy Edge, is still the onlybrowser to play back Netflix in 4K.