CSIRO is the first customer to use the service 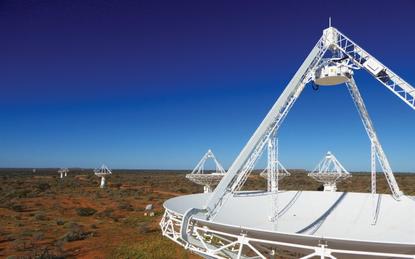 Internet service provider Australia's Academic and Research Network (AARNet) has announced the launch of high-bandwidth services capable of delivering more than one Terabit per second for research and education purposes, with the expectation of increasing capacity out of Perth by up to 50 times the existing amount.

Australia's national science agency CSIRO is the first AARNet customer to use the service for operation of the Murchison Radio-astronomy Observatory (MRO) in outback Western Australia.

CSIRO’s usage of the AARNet service is said to improve the usage of the Australian Square Kilometre Array Pathfinder (ASKAP) and the Murchison Widefield Array (MWA) telescopes located at the MRO with the use of a 10 Gigabit per second virtual private network between Sydney and Perth as well as a 100 Gigabit per second end-to-end encrypted optical circuit connecting the National Computational Infrastructure in Canberra and the Pawsey Supercomputing Centre in Perth for research-related activities.

Chris Hancock, CEO of AARNet, said international capacity out of Perth will increase by 50 times the existing amount under the high-bandwidth service as well as providing sustainable high capacity network services for the research community in the long term.

David Williams, executive director of digital, national facilities and collections at CSIRO added that over 30 years, AARNet continue to play a significant part in the data transfer, computing and storage requirements of CSIRO researchers.

“The new Indigo capacity will support our ASKAP project now and we hope also the unprecedented flows of data the SKA is expected to generate,” Williams said.

“We’re very excited about using our optical circuit on Indigo Central – Sydney to Perth – to transform how supercomputing is used in Australia.”