The chatbot with its own office and personal (human) assistant 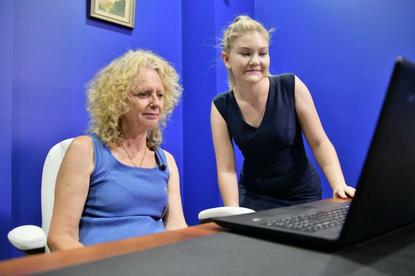 Chatbots provide a way for customers to transact with companies from wherever they are at any hour of the day. Virtual assistants also benefit companies, allowing them to reduce the time spent by human staff handling simple queries.

Those concepts are being turned on their head, however, by the company behind a legal information chatbot called Ailira, which has its own office and a dedicated human assistant sitting alongside.

Ailira helps people create a will by asking them a series of questions, the answers to which it interprets and uses to populate a form, and in turn generates a will document. Although Ailira is available online and via mobile, its creator Cartland Law is offering it in physical offices, the first of which has opened in a Northern Territory shopping centre.

“By far the greatest response has been from people wanting to see someone physically,” says Adrian Cartland, principal of Cartland Law.

“Particularly at the lower socio-economic end of the population, doing everything online is a bit of a step,” he adds.

To use Ailira customers enter the Cartland Law branch at the Coolalinga Shopping Centre, 29km south of Darwin, and sit in a private room with a computer and a human helper.

“The humans are not lawyers. But there's someone there that you can eyeball, who can smile at you, who can show you to a desk, within what is effectively the world's most limited Internet café, where you can only access our website,” Cartland explains.

“There’s nothing you can do in there that you can't do immediately outside. But when someone's making a will, or setting up a business structure or something, it's like: ‘This is important in my life, and I want to have the experience of going to somewhere and doing it’,” he says.

The human assistants can be trained in a few hours, in how to work the computer and interact with customers, and that “you're not allowed to answer any questions – you're not a lawyer” Cartland says. They also solve technical questions, book appointments, explain how Ailira works and witness documents.

If Ailira gets a tough legal question it cannot answer, it advises the customers sees a lawyer, or sets up an immediate video conference with Cartland.

The firm – which Cartland calls ‘The Law Firm Without Lawyers’ – now has two physical offices near Darwin, with plans to open more. Potentially Ailira could be taken on the road too.

Cartland says thousands of people have created a will using Ailira, with 42 people turning up on the Coolalinga office's opening day to do so.

Better than I did

Cartland set to work developing Ailira after quitting his job as tax counsel at a mid-tier firm four years ago.

“It was actually the hardest thing I've done in my life. It's hard to quit a bad job, but it's easier. This was a good job,” he says.

“But this is a once in a generation opportunity to change the law. There is so much of law that can be can be automated,” Cartland adds.

Ailira is based on IBM’s Watson and was initially developed as a tool for tax professionals to handle questions relating to tax law. To demonstrate its usefulness, Cartland got his girlfriend (a speech pathologist with “absolutely no interest in tax”) to sit an Adelaide University tax law exam armed only with Ailira.

“She got 73 per cent, which is actually better than I did when I did it,” Cartland says.

As well as a tax tool, and will creator, Ailira is also being adapted to help victims of domestic violence log evidence and create court documents. In that use case, it takes the form of a messenger chatbot in an innocuous looking app.

“That can generate the affidavits necessary to file an intervention order or a restraining order,” Cartland said.

There are so many areas of law that Ailira and chatbots can be applied to, Cartland says.

“I said to my old boss, before I quit, I think that I can automate 80 per cent of your job. There are certain things though, that lawyers will always be needed for. There's always a symbiosis between humans and machines. You'll always need lawyers or humans, for creativity, contextual reasoning, morality, judgement, empathy, advocacy,” Cartland says.

“Every lawyer that you speak to will say – oh, my practice, you can't automate it. And I used to think that too. Within 20 years, I think I can automate 80 per cent of the law,” he says.