Brands HPE and Nutanix deal as "admission" of failure 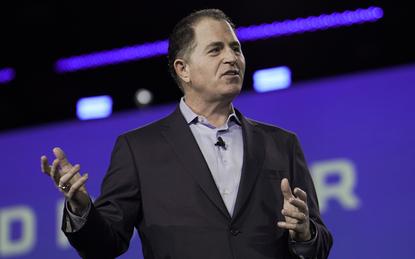 Michael Dell has questioned the multi-cloud strategy of industry rival Hewlett Packard Enterprise (HPE), claiming the vendor is off the pace as market competition heats up.

Addressing media during Dell Technologies World in Las Vegas, the founder claimed victory in hyper-converged infrastructure amid a flurry of new market alliances.

“I go back to 2014 and 2015 and I think, if you’re going to get in a brawl, make sure you take the first punch, and make it a good one,” said Dell, speaking as chairman and CEO of Dell Technologies. “That’s what we did by combining together with EMC and VMware and now we’re incredibly well positioned against all competitors.”

The put down was in response to questioning around HPE’s recent partnership with Nutanix, designed to target Dell EMC and VMware in hybrid cloud.

As reported by Channel Asia, the global alliance is centred around the delivery of an integrated hybrid cloud as-a-service solution, with the channel expected to play a central role.

In a direct reference to the agreement, Dell was unequivocal in his response.

“In the hyper-converged infrastructure market, we’ve already beat the competition,” he claimed. “I think nobody has a better or more comprehensive multi-cloud strategy than Dell Technologies and VMware together.

“At least for the part of HPE, in some ways this is an admission that their own strategy is not working so well. Everybody has to decide how they want to run their business.”

Following business growth of 14 per cent - backed by cloud and data centre gains of 19 per cent - Dell said the technology giant is also doubling down on strategic industry alliances to drive further market growth.

Central to this will be Microsoft, following a string of market announcements around cloud, digital and workspace solutions.

“All of this shows the capabilities that we have across Dell Technologies to enable the digital futures of our customers,” Dell added. “Customers don’t want to be system integrators anymore.”

The comments restart one of the industry’s most long-running rivalries, with Dell Technologies vs. HPE now a tale of diametrically opposed business model strategies.

“We have broad capabilities across Dell Technologies but the alternative is to create 20 smaller companies of $5 billion each in size,” Dell explained. “We have the scale and a breadth of capabilities from the data centre and cloud, to security and client workspace - this has been resonating well with customers.

“I’m hearing customers want fewer companies, not more. Part of this is coming from the sense of urgency that is a function of this digital transformation.

“Fewer partners and industry consolidation will be the trend and certainly our results point to that. We’ve been gaining share quite consistently across storage, servers and in our client business - there’s a trend to more complete solutions.”