How Splunk expanded into IoT 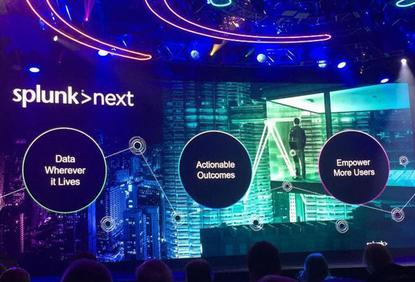 Machine data specialist Splunk has formalised its plans to enter the internet of things (IoT) space this week with Splunk Industrial IoT, promising to "take Splunk's ability to make data usable to an entirely new set of customers".

The product includes security monitoring for industrial control systems as well as real time visibility of asset data and machine learning models for predictive maintenance out of the box.

"Industrial organisations have lacked easy-to-use real time data analytics that use machine learning to help predict downtime and prioritise alerts across disparate systems so the business can take action."

The product will be generally available from 30 October, when the vendor officially enters what is a crowded market. SAP already offers predictive analytics for IIoT customers through its Leonardo platform and other major vendors like AWS, Dell, Hitachi, Microsoft, Salesforce and IBM offer their own cloud IoT platforms.

Speaking to Computerworld UK during the vendor's .conf event in Orlando this week, Maraqa explained that a certain set of "industrious customers" were already expanding their Splunk usage to IoT data, just as they had done a few years before, growing the vendor's remit beyond the IT domain and into the security space.

With Industrial IoT the vendor is looking to deliver a product for that new customer base, working with the early users on alpha and beta programmes.

"It's a different buying centre, so we want to show we are committed to serving them how they want to be served, and not delivering a disguised IT security product," Maraqa said.

This has included a hiring push to bring more IoT domain knowledge into the company.

"Over three years we have been building that market group with people for every function: product management, marketing and sales practitioners and specialists with domain expertise," Maraqa explained. This all comes together to form what he calls "a small incubated team at Splunk" that owns the IoT product.

IoT is a natural use case for Splunk, as it specialises in managing and making sense of big, messy data, but the vendor didn't want to rush into what is becoming an overcrowded space.

"We did a lot of market research and talking to customers on what is the right beachhead for us and where we could get started. Obviously there is tonnes of opportunity, but we didn't want to be an all things to all people player in IoT," head of product marketing Jon Rooney told Computerworld UK.

"The ML Toolkit allows you to work with people that might be a bit more sophisticated and see how people use the product for where we can automate and put ML in to make it easy for operators and users to get better," Maraqa said.

The product is naturally targeted at organisations in the manufacturing, oil and gas, power, transportation, energy and utilities sectors.

One early customer in this space is BMW, which has been working with Splunk to use its machine learning toolkit to make sense of data coming off its test vehicles.

The automaker showed off one use case from the keynote stage at .conf where it had developed a model to predict traffic patterns over the course of a week in Munich.

BMW is also looking to include more sources of data such as weather and public transport information to enrich its models to predict traffic patterns after an accident occurs, for example.

Another customer is German industrial engineering firm ESE, with director of data analytics Dr Ulrich Bock saying: "Our partnership with Splunk is critical to the success of these customers, blending our knowledge of operational technology environments with Splunk's powerful ability to make machine data accessible and usable to all.

"Splunk for Industrial IoT now makes it easy to harness and transform the massively growing volume of machine data into insights and energy to power and accelerate their digital transformation initiatives."