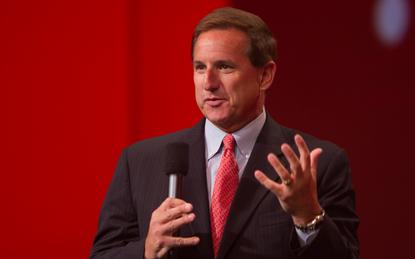 Oracle’s Bring Your Own Licence (BYOL) offering continues to be a bright spot for the tech giant, with BYOL deployments of licensed databases driving customers to purchase new licences to be directly deployed on cloud resources.

Oracle first detailed its Bring Your Own Licence to platform-as-a-service (PaaS) in September 2017, with the company’s chairman and CTO Larry Ellison saying at the time, “we are completely transforming the way all companies buy and use cloud by providing flexibility and choice”.

The idea behind Oracle’s BYOL approach is to give customers with existing on-premises licences the ability to leverage their existing investment to use Oracle platform-as-a-service (PaaS) at a fraction of the old PaaS price. In doing so, customers have the potential to reduce their management and operational costs.

The tech giant had already allowed customers to bring their on-premises licenses to its infrastructure-as-a-service (IaaS), and the new offering was viewed as another step in bringing them into cloud environments, while addressing the cloud adoption challenges they face with their on-premises software investments.

In December 2017, Oracle’s licence and maintenance ‘on premises’ revenues for the second quarter saw accelerated growth, likely because customers were beginning to view the BYOL offering as a cost-effective means to leverage licence investments as they transition to cloud.

Now, Oracle’s fourth quarter results have seen further evidence that the company’s BYOL approach is continuing pay dividends, with the bright point for many of the company’s executives the traction of its BYOL deployment option, according to Technology Business Research (TBR) senior analyst Meaghan McGrath.

“Moreover, purchases of the database options necessary to license the autonomous Oracle database in a BYOL model have increased ‘mid-teens [per cent]’, and CEO Mark Hurd’s comments alluded that autonomous database subscriptions are starting to show up in the company’s pipeline and will then have a financial impact in the coming year,” she said.

McGrath suggested that TBR expects BYOL deployments of Oracle’s traditionally strong database technology to be a key factor to the company’s long-term success.

Overall, Oracle saw total revenues grow by three per cent, year-on-year, during the three months ending May, rising to US$11.3 billion.

Meanwhile, fourth quarter cloud services and licence support revenues were up by eight per cent, to US$6.8 billion. However, Q4 cloud license and on-premises license revenues were down five per cent to US$2.5 billion.

At the same time, GAAP operating income was up eight per cent to US$4.4 billion.