TDC has partnered with Vivid Sydney for the past 10 years 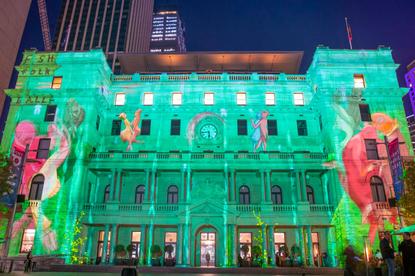 Technical Direction Company (TDC) has partnered with Vivid Sydney once again, and it is in charge of the projections on Sydney's most iconic buildings.

This year, Vivid Sydney, the event that lights up the city in autumn nights by combining arts, technology and commerce, is celebrating its tenth year.

The three-week festival kicks off on the evening of 25 May, and TDC, which has worked with Vivid in the 10 years of its existence, is in charge of the projections on 10 buildings.

The projection tech represents the equivalent to 20 million pixels or over 60 IMAX screens. A total of 22 media servers, which feed the content to the projectors, will help provide a total of 11km of projection.

TDC is using video projectors from Barco and media servers from Dataton Watchout and Disguise, previously known as D3 Technologies. There were 36 TDC employees involved, with 30 technicians in charge of setting everything up within two weeks.

Even though TDC has partnered with Vivid from the beginning, managing director Michael Hassett said the relationship has become more obvious in the past seven years, much to do with how the projection technology has developed.

TDC has also increased its presence within Vivid, which started as a two-site projection and has in 2018 reached 10 installations site, a number that has been exceeded before according to Hassett.

By being in charge of the projections on main buildings Hassett said TDC effectively owns Circular Quay in 2018.

The biggest change that took place in the last few years was the use of 3D scanning. According to Hassett, TDC scans all the buildings in order to know where everything will go within the tower and also the tower position in relation to the sites, as well as creating a projection of the tower itself in the preproduction phase. Hassett told ARN this has made their work far more precise.

The tender through which TDC has been chosen is put out annually by Destination NSW, formerly Tourism NSW.

Oracle-Liquid, a laser, light and liquid special effects company it is among the providers involved in this year's event.