The first iteration of Microsoft’s digital whiteboard is now in use at 5,000 businesses, but questions remain about customer demand long term. 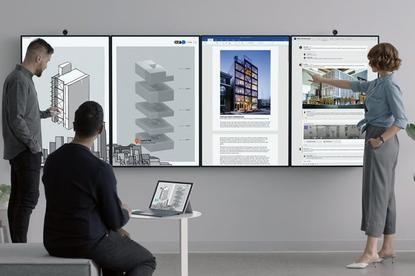 The Surface Hub 2 - set to launch in 2019 - features a 4K, 50.5-in. multi-touch display and contains 4K cameras that rotate with the devices, integrated speakers and far-field microphones.

The modular design allows for up to four Surface Hub 2 screens to be connected in portrait or landscape view, while rolling stands allow individual screens to be moved around office spaces.

Other new features include multi-user sign-in, which lets more than one person to be authenticated on a device simultaneously, allowing access to documents for example.

Digital whiteboards are aimed at easing collaboration and brainstorming for in-office and remote workers. Aside from the hardware improvements, the main strength of the Surface Hub 2 - as with the original device - lies in its integration with Microsoft’s application portfolio: namely Windows 10, Office 365, Whiteboard and the Team chat app.

Although Microsoft added integration between Teams and the first Surface Hub in March, the team messaging application will play a greater role in the next version from the start.

“Teams and Surface Hub 2 make for a compelling value proposition,” said Raúl Castañón-Martínez, a senior analyst at 451 Research, “because they build on each other’s capabilities, adding another dimension to team collaboration and meetings technology,”

Nevertheless, Castañón-Martínez said that linking the Surface Hub 2 with Teams could be a “two-edged sword” for Microsoft.

That’s because many companies are hesitant to invest in devices that will only work with specific tools, something he said has contributed to the slow adoption rate for digital whiteboards.

At the same time, deep integration with applications can increase usability of interactive whiteboards. “Microsoft is in a unique position because it has a significant market footprint with its productivity tools and can leverage it to increase adoption of other products such as the Surface Hub 2,” he said.

Microsoft has competition in the digital whiteboard market, notably from Google and Cisco. Google’s Jamboard is cheaper than the first Surface Hub - they were priced at US$4,999 and $8,999, respectively at launch, not counting subscription fees. And Jamboard features integration with the company’s G Suite tools, including Hangouts Meet and Chat applications.

Pricing for the Surface Hub 2 has yet to be announced, though Panos Panay, Microsoft’s chief product officer, said the device will be “more affordable” than its predecessor.

According to Microsoft, the Surface Hub is now in use at 5,000 companies, though it is not clear how many devices each of these customers have deployed.

Despite vendor interest in the interactive whiteboards, Castañón-Martínez said that it remains to be seen whether substantial numbers of businesses will actually invest in the devices, which can be expensive. It is “still an emerging market,” he said.

“The Surface Hub and other touchable HD whiteboards are fascinating technologies,” said Larry Cannell, research director at Gartner, but added that the technology has held promise for some time without taking off.

“Digital whiteboards have been around in some form for over 20 years. Their primary competitors are still in-room physical whiteboards.”