How one Sydney start-up is connecting smart cities to citizens

As the concept of smart cities gathers pace across Australia, OpenCity is taking a step back to focus on the human element of change 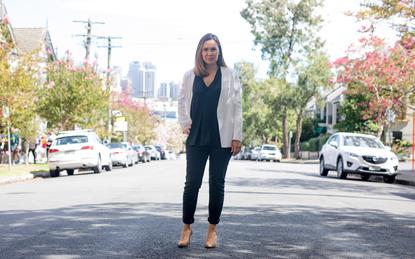 In an era of smart cities — that are designed to be productive, accessible and liveable — driving down pothole-ridden streets should be an annoyance of the past.

Yet the concept of smart cities remains exactly that, an idea yet to materialise and a theory yet to transition into practice.

“The view is that technology is going to solve all city problems but I believe the human element is often overlooked,” OpenCity founder, Ana Ouriques, observed.

Driven by a desire to improve city conditions across Australia, starting with Sydney, the start-up is stripping back layers of technology to solve daily challenges for residents.

“The concept of creating smart cities is focused on the technology instead of listening to people who actually live there and know the city better than anyone else,” explained Ouriques, who launched the business in mid-2017.

“We’re going local to connect with the people who live in the city and see issues first-hand every day.”

For the smartphone wielding citizens of Sydney, OpenCity — which currently houses more than 2,000 users in Australia — is currently focusing on abandoned trollies, responding to user feedback via the cloud platform.

“This was one of the first challenges reported, followed by graffiti and potholes,” Ouriques added. “Citizens notice these problems because they are often out walking or driving but they have nobody to report these issues to.

“On most occasions, the local councils don’t even realise a problem exists because there is no mechanism to tell them.”

Firstly, the platform allows citizens to discover new issues, before capturing the problem through images, text or GPS to accurately depict the situation.

With this feedback passed on to the relevant local authorities, users can then share and discuss topics with fellow neighbours, in a bid to create a collaborative environment locally.

“We started building OpenCity before the smart city concept took off,” Ouriques said. “Rüppells Griffon specialises in location intelligence and our customers started requesting a tool that could provide real-time feedback regarding city problems.

“We knew there was a gap in the market to have those transparent conversations between citizens, business and government authorities.

“When we talk about smart cities, everyone is trying to create a technological solution and therefore fails to take a step back and actually listen to the people who live locally. That’s what OpenCity aims to do.”

Currently, the model is free of charge in a bid to encourage both councils and citizens to conduct healthy discussions around smart cities.

Through creating a profile — which can also be anonymous — users are contributing to a giant treasure trove of data, providing OpenCity with a clear insight into how future cities will evolve during the years ahead.

“There’s two sides to OpenCity,” Ouriques explained. “Firstly, we receive feedback from the community to gain an understanding of the problems facing citizens. We also create heat maps to highlight continuous problems that don’t get resolved.

“This applies to graffiti for example which is cleaned and then returns so by engaging the community we can help build solutions to solve ongoing problems. We have chat integration functionality so users can engage in conversation.”

Secondly, the start-up also dives deep into the technology stack, leveraging machine learning to ensure systems are smart enough to understand the images being received by users.

“This immediately highlights what the problem is,” Ouriques added. “So, when we receive images of abandoned trollies we know straight away that this is a trolley complaint and we place the problem into a different category.

“And through using our mapping technology, we know which area the incident has happened in and can separate issues by categories and location. This information is then forwarded on to the authorities responsible.”

In short, the start-up aims to become a one-stop-shop for citizens to communicate feedback, providing a valuable resource for government authorities in the process.

“Councils spend hours trawling through social media trying to identify and then reply to problems,” Ouriques explained. “But also, if there’s a pothole in the road this could be a local or private road and therefore could fall under a different authority.

“Through our mapping, we know immediately which authority is responsible for this area and issue, and can communicate the feedback in real-time.

“We want to encourage councils to participate in this conversation and listen to citizens. It’s time to initiate a two-way conversation because when citizens call the council to report issues, they have no idea whether the complaint has been followed up or not. OpenCity helps open the lines of communication.”

In building an advanced application, Ouriques and the OpenCity team — backed by Rüppells Griffon expertise — is creating a solution that isn’t bound by borders or laws.

For this concept, and the cloud platform on which it sits upon, is capable of scaling at speed, evolving outside of Sydney and Australia to tap into new global markets.

With the business already live in Australia, and Brazil following a mid-2017 launch, OpenCity is now targeting the lucrative US market.

“This is the perfect time to have a platform such as OpenCity,” Ouriques added. “Cities are growing rapidly, people are getting more aware of their environment and how it affects the quality of their everyday life.

“With the growing demand for community collaboration, OpenCity can leverage technology to make cities smarter and better.”

Currently, Ouriques said around 90 per cent of current solutions centre around location intelligence and mapping, aligned to the capabilities of Rüppells Griffon.

“OpenCity will bridge the gap and bring the smart cities concept closer,” Ouriques added. “We’re heading towards the stage of focusing more on people than on technology.

“Our approach is to slow things down and not rush this development. There’s little value in jumping into the idea of smart cities when we still have so many basic city problems to solve.”