What can Kaspersky Lab hope to gain from its Crime Stoppers partnership?

Eugene Kaspersky talks down US government ban on vendor, as it boosts its standing locally 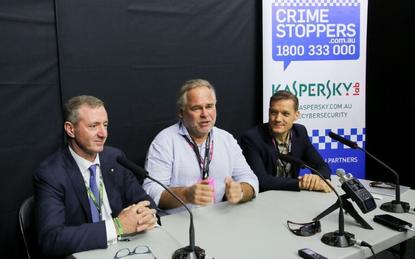 On 22 March, Kaspersky Lab announced a non-commercial partnership with Crime Stoppers in Australia, with the aim of educating the local community against online crime.

The deal, born out of a meeting in Singapore and influenced by both Kaspersky Lab and Crime Stoppers' existing relationships with Interpol, sees the cyber security vendor share data and training tools that will enable Australians contacting crime stoppers call centre to learn about cyber crimes.

Crime Stoppers is a crime prevention organisation that provides ways to help solve and prevent crime through information from anonymous sources about crimes and criminals to law enforcement agencies. In Australia, it has a different program in each state and territory focused on the needs of each community.

Kaspersky Lab has a lot to gain from this partnership, given the fact that its products have been banned from use by certain Government entities in the US, UK and Lithuania.

The company's CEO and co-founder, Eugene Kaspersky told journalists at a press conference on 22 March at the Melbourne Grand Prix Circuit, that it's the vendor's social responsibility to help the community to be protected from cyber crime, and this partnership is just a part of that.

In fact, Kaspersky Lab said that the US Government only generated US$50,000 in business during 2017, with the company founder saying that the ban on the vendor's products was a "politically motivated" move from the US Government.

Crime Stoppers director, Peter Price, however, does not appear to be deterred.

"We are seeing a change in the landscape where cyber crime and the internet are the new frontier for a lot of criminal activity and it's our role to see how we can steer the community to a safer place," Price said.

“In the last two years, we’ve seen an increase in cyber crime and victim reporting from the general public. The rise of IoT [internet of things] has resulted in a proliferation of communication channels that give cybercriminals choices in how they harm people.

"In New South Wales alone 30 per cent of all Crime Stoppers reports received are now online," he said.

The partnership will see people calling about cyber crimes be directed to three websites with data and information on online crimes including Kaspersky Lab's blog, its website and Securelist.com.

A public relations campaign and digital activities will be rolled out later in the year.

As a result, Kaspersky Lab will not only be raising awareness to online crime but also to its brand – some positive awareness which could lead to more end user business.

As people continue to be the biggest cyber risk businesses face, raising awareness can also raise the need for more training in the cyber security space.

With the Crime Stoppers logo soon to be included on Kaspersky Lab boxes, partners could benefit from a possible rise in popularity of the brand and not only increase sales but also find opportunities to offer training and consulting services.

During the event in Melbourne which gathered Kaspersky Lab partners, the company's CEO said that partners moving away from Kaspersky Lab as a result of the noise caused by international governments were making a mistake.

"We are the only vendor that is able of detect any kind of complicated malicious code," Kaspersky said.

He was also adamant saying that the allegations against the company were not based on facts.

In December 2017, Kaspersky Lab asked a US federal court to overturn a Trump administration ban on use of its products in government networks, saying the move deprived the company of due process.

Anastasia Rae, Kaspersky Lab A/NZ general manager, said that conversations with Australian partners have not been affected by those headlines.

Asia Pacific managing director for Kaspersky Lab, Stephan Neumeier, also said that the issue with some governments have raised interest from others.

"We have seen more demand for Kaspersky Lab intelligent reports specifically in China, India and most South Asian countries, because these governments can read between the lines and see what we do."

Neumeier also claimed that Kaspersky Lab is the only global cyber security company investing in providing transparency to its customers through the creation of transparency centres with full visibility to what the product do, how it works, how updates works, how to connect data and also the possibility to inspect the source code.

"Fortunately, I'd say we are the only global cyber security company with such initiative today," he said. "Most of our competitors have publicly announced that they would not share their source code with any foreign government, which means one government most likely have access to it."

Samira Sarraf travelled to Melbourne as a guest of Kaspersky Lab.