With every major technology vendor now offering a virtual assistant, one Australian start-up is taking data science to the world 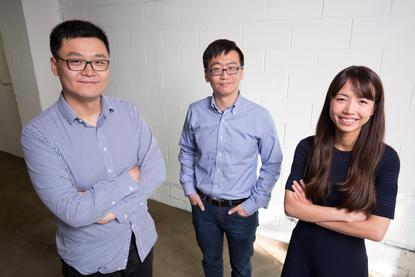 Picture the scene. It’s Monday morning, the boardroom is crowded, the coffee cups are full and the questions are flowing.

Sales targets, revenue forecasting and monthly figures are high on the agenda, yet as is commonplace across organisations of all shapes and sizes, straight questions seldom yield straight answers.

Because a simple request such as getting an answer from a question asked to a colleague can take several minutes.

With so many options to communicate these days, businesses can often take the longer step of sending an email instead of addressing a person directly.

The industry today however has become accustomed to asking questions virtually, to assistants such as Siri from Apple, Cortana from Microsoft or Alexa from Amazon.

Closer to home, businesses are also used to tapping the real-time brains of Alex, the virtual assistant now at the service of the Australian Taxation Office website.

But a disconnect still exists — organisations have quickly realised the value of data, yet remain challenged to maximise such information, with blockades in place when attempting to extract insight.

Coupled with a lack of data scientists active in the local market — especially within financial services — one Australian start-up is facing industry giants through game- changing software.

Specifically, users can quiz the virtual assistant via text, email or by asking a question to a mobile interface, in the same way as current market offerings.

Housing the capability to address several requests at any given time, the software returns insights to a user in as little as six seconds.

“A lot of the problems that we solve with Hyper Anna today were problems that we witnessed first-hand,” Hyper Anna co-founder and CEO Natalie Nguyen said. “Many organisations globally are struggling to find data scientists to do the analytics and get the insights they need.”

Alongside fellow co-founder Sam Zheng, both hold experience as data scientists, which in turn provided the inspiration to develop an application in the form of Hyper Anna.

“For us the secret sauce is that our team are all data scientists,” Nguyen added. “It’s different from tech start-up teams where the majority of people come from engineering backgrounds. Our approach is data analytics for everyone –not just the select few.”

According to Nguyen, the software automates analytics processes, allowing employees to ask complex questions without the need to reach out to a data scientist.

Currently, the application — which is built on the Microsoft Azure platform — is designed to answer questions in plain English but, with plans of expanding into China and other Asian markets, other languages will be available soon.

“There are three ways to interact with Anna, you can either go into a website and basically the data has been piped directly to Anna’s brain and sits in an Azure cloud, then you can ask a question in the website,” Nguyen added.

“The third way that you can interact is just text a number, just like texting a person, and Hyper Anna will be able to get back to you.”

As organisations become suffocated by the vast amounts of data swarming throughout the business, a realisation is fast emerging around lack of visibility for employees.

“This means they might not have the skill set, or they might need access to the business analytics team to actually get access to the data,” Nguyen added. “It is very time consuming and costly to have a large team of data scientists in an organisation.

“Most of the time we found that you can be a really big organisation and realise you have a lot of data that has a lot of value but you don’t know how to scale the data science function in a seamless way. And that is what our product is designed for.”

If the business was to have a mission statement, according to Nguyen, Hyper Anna was created with the idea that all businesses deserve to have access to a data scientist to drive value from data, regardless of size or scope.

And by working 24x7, alongside the ability to answer 43 questions per second, the application exceeds the capabilities of a data scientist on every level.

But this wasn’t created to automate and effectively steal jobs, rather to free up data scientists to focus on more innovative and mission-critical endeavours inside the organisation.

“Currently, a large volume of the work of data scientists is based around reporting,” Nguyen explained. “Hyper Anna can do reporting at a much more efficient rate than a human analyst can, freeing up the data scientist or analyst to really focus on more strategic matters.”

Due to machine learning technology that underpins the system, Nguyen said insights delivered are sculpted to reflect the real intent of the question.

“When humans ask a question we always have an intention for the question,” she added. “If you have asked me ‘how are my sales doing?’ and I told you that you had sold $100,000 of product, that is actually not very insightful at all.

“Your intention is to know whether your performance last week was really good or was it not good and why.”

A smart solution to an ongoing problem

Despite being only 18 months old, Hyper Anna has already received international recognition, after being acknowledged as a cool vendor by Gartner, across the AI for Banking and Investment Services category.

As outlined in the analyst brief, the business is deemed cool because it allows any person in an organisation to ask complex questions of a company's dataset in plain English and get an insightful response.

“It is a smart machine agent that performs the role of a data scientist,” Gartner analyst Derry Finkeldey observed.

“Hyper Anna is cool because it presents the opportunity to democratise data in every enterprise, with a particular fit in financial services — any role can ask for an analysis and get an answer in seconds.”

In a ringing endorsement of the product, Finkeldey advised the C-suite to consider Hyper Anna as a viable alternative strategy to interpreting company data.

“CIOs and the C-suite leaders they support should consider Hyper Anna,” Finkeldey added. “In particular, CMOs and CCOs [chief customer officers] who are struggling to get timely responses from different business units and want to avoid duplicating analytic initiatives across the enterprise may benefit from this product.”

According to Finkeldey, users with specific and regular requirements for timely reporting, particularly in relation to specific customer initiatives or marketing campaigns, could benefit from the use of Anna.

“The most popular use cases in financial services are to empower sales and marketing employees to design initiatives to drive better results,” Finkeldey added.

Today, virtual assistants learn from interaction, and the way Hyper Anna is introduced to a business is what makes its initial use highly effective.

Prior to being widely deployed across an organisation, small user groups representing different parts of the business are put together.

These teams will use the application for two weeks which will train the AI and make Hyper Anna able to understand 85 per cent of questions asked in the first attempt.

The result is an application which aims to address the top challenge in the industry — the shortage of data scientists within financial institutions.

Furthermore, Hyper Anna delivers a tool that can be accessed by all individuals within an organisation to address a challenge usually left to top management.

“Hyper Anna is taking this a step further by delivering access to all roles inside the organisation,” Finkeldey added. “It removes the silos associated with data scientists in banking and investment services, where middle and lower management employees are removed from daily operations.”

Even though Hyper Anna can work across verticals and industries, the virtual assistant currently focuses on financial services.

“With any AI agent, you really want to focus the training on a particular domain and become the best software solution to solve that particular problem,” Nguyen explained.

While not discounting a move into other verticals within the next 2–3 years, Nguyen acknowledged that being named a cool vendor by Gartner is a “signal that we should be looking into other regions”.

Since inception, the start-up has been building a global strategy, refining and retuning priorities over time.

Currently, Hyper Anna already operates in Hong Kong, with plans to move into other markets such as Singapore, China and even the US.

From a technological standpoint, expansion will come in parallel with broadening Anna’s horizon in terms of languages she currently speaks, alongside a deeper knowledge of the global financial market.

And it appears that the industry is happy to go along for the ride, with the company recently raising $16 million in Series A funding, which will be key to realising international expansion ambitions.

“The fact that some of our investors are also our customers, gives us great confidence in the company, in ourselves, and the product,” Nguyen added.