Shares of the world's largest software company rose nearly four per cent to US$81.90 in trading after the bell 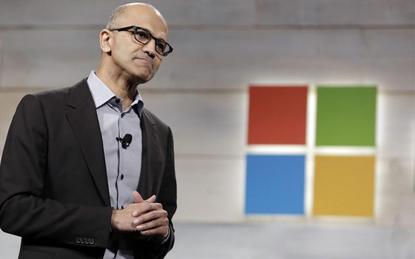 Microsoft reported a better-than-expected quarterly profit as demand for its cloud computing services for companies rose and its personal computer software business stabilised.

Shares of the world's largest software company rose nearly four per cent to US$81.90 in trading after the bell.

Microsoft's focus on fast-growing cloud applications and platforms is helping it beat slowing demand for personal computers that has hurt sales of Windows - the software that powered the company to the top in the 1990s.

Under CEO Satya Nadella, Microsoft's cloud business - which includes products such as Office 365, Dynamic 365 and the flagship Azure computing platform - has emerged as a major source of growth.

Revenue from Microsoft's intelligent cloud business rose nearly 14 per cent to US$6.92 billion in Microsoft's fiscal first quarter, ended 30 September. Analysts on average had expected US$6.70 billion, according to financial data and analytics firm FactSet.

Revenue from Azure, which competes with Amazon.com Inc's Amazon Web Services and offerings from Alphabet Inc's Google, IBM and Oracle, grew 90 per cent compared to a 97 per cent growth rate in the preceding quarter.

Microsoft said its commercial cloud annualised revenue run rate reached US$20.4 billion in the quarter. In 2015, Nadella set a target of US$20 billion in cloud revenue by 2018.

Revenue from Microsoft's personal computing division, its largest by revenue, fell 0.2 per cent to US$9.38 billion but handily beat analysts' estimate of US$8.81 billion.

"Microsoft is set for an acceleration of growth and bookings with margin concerns that were overblown heading into 2018," said Daniel Ives at research firm GBH Insights.

"A slowly improving PC environment is also a modest tailwind for Microsoft with cloud remaining the Trojan horse growth driver for Redmond over the coming years."

Microsoft's shares had risen nearly 27 per cent this year through Thursday, eclipsing the 14.4 per cent gain in the broader S&P 500.

(Reporting by Salvador Rodriguez in San Francisco and Pushkala A in Bengaluru; Editing by Arun Koyyur and Bill Rigby)