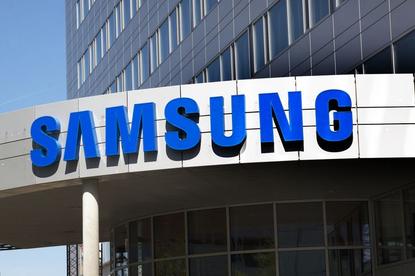 Samsung Electronics is expected to forecast a record third-quarter profit on Friday thanks to the strong market for memory chips, and as mobile earnings bounce back from last year's costly withdrawal of the Note 7.

The failure of the fire-prone Note 7 smartphone is now a distant memory for the South Korean technology giant, which is near its highest ever market valuation after a nearly 50 per cent surge in its share price so far this year.

The world's biggest maker of memory chips and mobile phones has been the chief beneficiary of the sizzling semiconductor market, as mobile devices and servers demand ever greater processing power.

"Fourth-quarter earnings will improve across the board and keep improving in 2018."

Samsung's July-September operating profit is expected to rise to 14.3 trillion won (US$12.51 billion), according to a Thomson Reuters survey of 19 analysts. That is nearly three times the 5.2 trillion won posted a year earlier and slightly better than the previous quarter's 14.1 trillion won.

Arch-rival, Apple, will issue its earnings guidance early on Friday.

Strong global demand for DRAM chips will continue to outpace supply in 2018, while demand for NAND flash chips exceeded supply for six straight quarters as of last month, DRAMeXchange, a division of data provider TrendForce, said.

Samsung's mobile division is seen posting operating profit of about 3 trillion won, compared to just 100 billion won in the third quarter of 2016. Pre-orders for the Note 8 hit the highest-ever for the Note series.

However, the display business could improve in the fourth quarter on the back of sales of organic light-emitting diode (OLED) panels for new Apple smartphones.

Samsung will only provide estimates for July-September revenue and operating profit on Friday, and will disclose detailed results in late October.