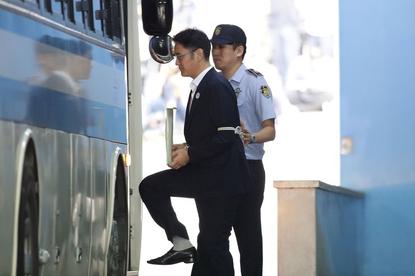 Samsung Electronics vice chairman, Jay Y. Lee, will begin an appeal of his five-year jail term for corruption, in a case highlighting South Korea's issues with the family-run conglomerates that dominate the economy.

A lower court last month convicted the 49-year-old Lee, heir to the Samsung Group and one of Asia's largest technology companies, of bribing former president Park Geun-hye to help strengthen Lee's control of the crown jewel in the conglomerate, Samsung Electronics. Park is also under trial over allegations of abuse of power and bribery.

At Thursday's hearing, the Seoul High Court will set the order of witnesses and evidence for the appeal trial, which is expected to begin in mid-October.

Since Lee filed for appeal late last month, the appellate court is likely to try to rule by next January, as under Korean law, he can only be kept in detention a maximum of four months while the court considers his appeal.

Whichever side loses is likely to appeal again to the Supreme Court.

Four other Samsung executives were also convicted in the lower court in the bribery case.

Earlier this month, the defence team laid out its strategy submitted in hundreds of pages of arguments to the High Court.

The defense is expected to question the lower court's logic that Lee expected Park's help in "succession operations," which the court defined as all actions Samsung affiliates took "to strengthen Lee's control of Samsung Electronics."

Lee's defense has argued there was no such thing as "succession operations" and actions such as a 2015 merger of two Samsung affiliates was taken for the companies' own perceived profit.

The lower court ruled that while Lee never asked for Park's help directly, the fact that the merger did help cement Lee's control over Samsung Electronics "implied" he was asking for the president's help.

Another defence argument turns on whether there was in fact a bribe as defined under South Korean law, which says only civil servants come under the statute. Lee was found guilty of providing financial support for former president Park's close friend and confidante, who was not a civil servant.

The lower court found that Samsung provided financial support to entities backed by Park's friend Choi Soon-sil, including 7.2 billion won (US$6.4 million) to sponsor the equestrian career of Choi's daughter.

The court said this was a straightforward case of bribery as "it can be considered the same as she (Park) herself receiving it." Lee's defense is expected to argue no evidence exists to back that assertion.

Lee testified during the trial he had limited knowledge and authority over business decisions in affiliates except Samsung Electronics and related tech affiliates, which took up about 90 per cent of his work.

His lower court trial began after Park was impeached, but before her successor, President Moon Jae-in, a liberal critic of the conglomerates known as chaebol, was elected in a special presidential vote in May.