Samsung's de facto leader has been in detention since February 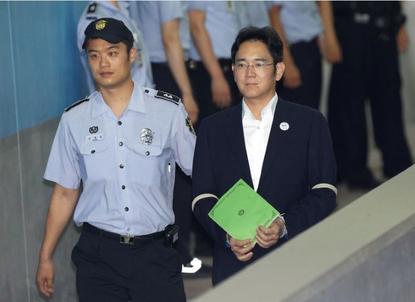 Samsung Group has no 'Plan B' for taking big decisions if its billionaire de facto leader, Jay Y. Lee, is jailed for corruption, people familiar with the matter said.

Lee, 49, has been in detention since February, on trial for charges ranging from embezzlement to perjury in a scandal that prompted the ouster of the country's ex-president Park Geun-hye.

He denies wrongdoing, and a lower court will give its verdict on Friday, with prosecutors demanding a 12-year jail term. He would likely appeal any conviction.

Facing a possible leadership vacuum, Samsung Group - whose businesses range from the world's leading smartphone and chip maker to hotels and insurance - has no plans to set up a leadership committee or a new executive role to drive strategy and take key decisions.

That could be a risk as some of the sprawling conglomerate's weaker businesses go through a turnaround plan or look for fresh growth drivers.

"There's no one right now who'll decide on group-wide issues," said a person with direct knowledge of the matter, who asked not to be named due to the sensitivity of the issue. "It's not impossible to imagine a scenario where a Samsung affiliate gets into trouble and other units become entangled."

Previously, Samsung would have resorted to its powerful Corporate Strategy Office - dubbed the control tower - that oversaw the group, orchestrated the big decisions on asset sales or arranged support for weakened affiliates.

But Samsung disbanded that office in February after it was criticised for its role in the graft scandal. It also suspended its weekly "Wednesday CEO meetings" of affiliate firms, leaving no centralised coordination. And Choi Gee-sung, Lee's mentor and head of the control tower, stepped down.

"I think Samsung faces major challenges in efficiently managing the entire group ... it will struggle for a while to re-establish a strategic decision making process," Kim Sang-jo, South Korea's new antitrust chief, said.

In a statement, Samsung said: "The Corporate Strategy Office's role was to support affiliates and coordinate with them, including mediating overlapping businesses and (their) different interests, but the final business decision was made by each company."

It noted the group had already announced that management at each affiliate would be led independently by their respective CEOs and boards.

While Lee's detention appears to have had little impact at Samsung Electronics - though its share price has dropped nine per cent from a record high in the past month - there are signs that future prospects for some businesses are being impacted.

South Korea's financial regulators this month cited the Lee trial when it delayed a review on Samsung Securities' request to be allowed to sell short-term investment products - a key plank in the company's growth plan to expand its investment banking services.

"The current situation is rather disconcerting," said a spokeswoman for Samsung Securities.

Since group patriarch Lee Kun-hee was hospitalised following a heart attack in 2014, his son Jay Y. has led a restructuring - shedding non-core assets, mulling a capital injection for struggling Samsung Engineering, and creating a de facto holding company that tightened his grip.

The process has stalled this year with his detention - he said at his trial that he spends more than 90 percent of his time running Samsung Electronics.

Samsung insiders say the group is unlikely - if Lee goes to jail - to follow the example of SK, a telecoms-to-energy conglomerate, which relied on a "Supex" group leadership committee when its chairman Chey Tae-won was jailed. That group led CEO-level reshuffles in 2013-15 until Chey returned after a presidential pardon.

"I don't think (such) a management committee is likely. It would look as though the Corporate Strategy Office has returned, just after it was disbanded," one Samsung affiliate official said.

And nor is Lee Boo-jin, CEO of affiliate Hotel Shilla Co, expected to step up to fill her brother's role at Samsung Electronics or group-wide, people with knowledge of the matter said.

"The business division between the heirs is rather set," said an official at another Samsung affiliate. "The pre-set flow of reporting up and decision-making will not change easily," the person added, noting Lee Boo-jin's focus on hotel and duty-free operations and Jay Y. Lee's control of technology units.

For some investors, the worry is that any extended absence of Lee could slow decision making and delay moves that are needed to secure future growth.

Samsung Electronics, for example, announced six M&A deals last year, including buying Harman, a US maker of connected car and audio systems, for US$8 billion.

This year, there have been none.

"They were in the long-term process of changing all divisions into B2B, when Lee was detained. This could throw a spanner in its macro direction, and make it more difficult to decide on large-scale M&A."

A Seoul-based fund manager, who has invested in Samsung affiliates, said all Samsung businesses would be able to carry out their operations as usual, "but large M&A deals and decisions affecting long-term strategy ... will be difficult."

"We don't plan shifts in investment on this," said the fund manager, who is not authorised to speak to the media, so asked not to be identified.

"If Lee receives a ruling that finalises his detention, of course investor sentiment will be bad on the day, but I don't expect any lasting effect."