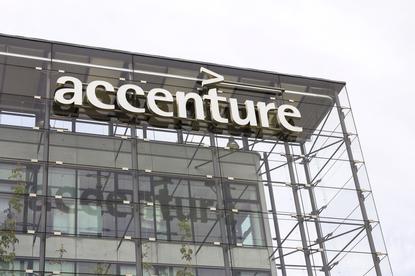 As one of the world's largest global system integrators (GSIs), Accenture is a difficult ship to turn at speed.

But as the past two years have demonstrated, the business has come through a round of internal transformation initiatives, initiatives which has left the company leaner and hungrier to compete.

In fact, Accenture is in the process of transforming itself into a digital-first enterprise, which the GSI currently over halfway in the public cloud.

"It is horses for courses because some of the applications we had to move to the cloud went straight to a software-as-a-service (SaaS) solution."

Previously, Conti said the company’s global system for facility and sales process management was running on an on-premise SAP solution, before an internal switch to Salesforce.

This was also the case for Office 365 and Skype for Business, where the company made the decision to shift from an old on-premise environment to public cloud technologies.

Given the size of Accenture - a company which employs more than 4000 staff in Australia and 400,000 globally - this instantly elevated the business to one of the largest users of these three applications worldwide.

“A few years ago, our CIO made an assessment that cloud was the future and decided to go all in on cloud," he said. "Since then, we have been on this journey to migrate applications and data into a cloud-based solution."

As a result of this shift, Conti said Accenture has dramatically reduced its global data centre footprint, and now retains facilities in only three countries, spanning the US, UK and Germany.

"Not everything can end up on AWS [Amazon Web Services] and Microsoft Azure so it is about what solution is appropriate for each workload,” he explained.

Currently, Conti said the integrator has 60 per cent of all applications in the cloud, with a goal of reaching 90 per cent within the next 18 months.

The remaining workloads and data sets will need to remain in Accenture’s own data centres due to data sovereignty and other regulatory requirements.

"We are using a multi-cloud approach and this is key because it increases our agility and speeds up delivery compared to the old method of buying solutions for our own data centres,” he said.

This shift in thinking is not restricted to cloud however.

Locally, the Accenture business also recently made a push into other digital markets through the acquisition of creative agency, The Monkeys, and design business, Maud.

The scale at which Accenture operates has resulted in the business developing bespoke solutions to facilitate its move to cloud.

Conti said the vast number of Skype for Business users have required the firm to maintain a telephony infrastructure to support call volumes.

"As the company is so big, some of the solutions need to be dedicated, but as cloud solutions mature and technology evolves, ideally we can get rid of that as well," he added.

On both sides of the Tasman, Accenture does not have any dedicated data centre space, but maintains small amounts of on-premise infrastructure at each of its local offices.

Meeting demand from within and without

To meet the growing demand for cloud services, Accenture Australia has been on a hiring spree of late, cloud specialists in particular.

"Various divisions within Accenture are looking to hire cloud skills,” Conti said. “In my area, it is more about the infrastructure space with AWS and Azure, those are the two key areas where we are actively hiring.”

Conti said the company is also assessing the potential of Google’s impending cloud platform launch in Australia, detailing his admiration of the search giant’s growth since launching the solution.

However, this is only a part of Accenture’s talent requirements as it looks to address growing trends in the market.

“As you move up the stack, you start to look at Platform-as-a-Service (PaaS), Software-as-a-Service (SaaS) and development and operations (DevOps), it becomes about Salesforce, Workday, Success Factor, Ariba and Concur,” he said.

As a result, Conti said the company is looking for skills in DevOps because it is becoming the de facto standard for digital applications.

“People who can come in, establish a strategy and development solution are in high demand," he said. "My colleagues are looking to hire 30 people in the next few months just in the DevOps practice.”

Conti said the company is looking to bring on at least 100 new people in the SaaS area in the near future.

"That’s what we see as the need in the market,” he said. “It is moving pretty fast and while there are still some on-going projects in the private cloud and on premise areas, that is not where the demand is.”

As a part of this push, Accenture A/NZ recently formalised a collaboration agreement with Sydney-based hosting and managed service provider, Bulletproof.

The company also deals with a number of State and Federal Government agencies, many of which now have cloud-first strategies.

Locally, Accenture played a role - along with the integration arm of IBM - in helping the Australian Taxation Office (ATO) shift all its mission critical applications to AWS.

In addition, the Department of Defence recently awarded an $8.38 million contract for the provision of software support activities as part of its payment system overhaul to the GSI.

“Approximately 80 per cent of our projects right now are in public and hybrid cloud,” Conti added. “A few years ago, that number was closer to 10 per cent.”

Accenture is betting big on public cloud not just due to customer demand, but also because it sees greater opportunity for what Conte described as “value-add”.

“The traditional business is still stable but is becoming very commoditised and of course in due time, we want to capture new business and position ourselves for the future,” he said.

This drive is all well and good but Conti said the challenge is the finite pool of talent which is insufficient to serve industry need.

He added that Accenture’s position in the market does make it an attractive proposition for would-be employees and while demand has driven up wages in the space, it was not the only factor applicants were considering.

The company has also heavily invested in its training programs to give potential new hires greater incentive to join.

“In the last twelve months, we have trained up approximately 200 people in various AWS certifications,” he said. “These are serious training programs, they include three days training followed by two days personal training which amounts to 100 days of training investment.”

All this investment has established Accenture as the highest certified GSI on AWS in Australia.

“We will continue to do that because our target is to reach 300 certified engineers in AWS,” Conti added.

But it does not stop there for Accenture, which is also looking to on board skills in Microsoft’s cloud platform and increase certifications to a similar level.

“We also want to do the same in other technologies as well as the ability to work across different project and technologies also attracts people,” Conti added.