​The Yield - Inside the mind of Mother Nature

As organisations begin to experiment with intelligent apps, The Yield founder and CEO, Ros Harvey, explains how the Australian start-up is racing ahead in agriculture. 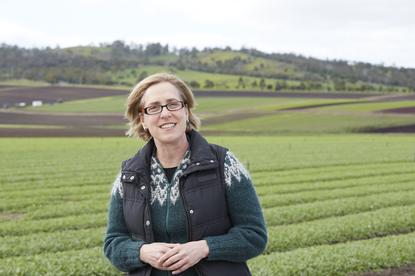 Perhaps not the most common opening lines of an elevator pitch ever heard, but for Ros Harvey, such diversity breeds ingenuity.

In founding The Yield in 2014, Harvey is crafting a world-leader of intelligent solutions in agriculture, an industry ripe for the picking - quite literally - and primed for innovation.

“I have an eclectic background and I sometimes describe myself as an unlikely entrepreneur,” admitted Harvey, who started the company from her kitchen in Hobart.

“But I think that helps because whilst I love technology, it’s important to focus on the business problem you’re trying to solve. Technology is a business enabler.”

When chatting to Harvey it’s clear that the story behind The Yield fits the typical start-up archetype.

For agricultural tech – known as agtech for short - has gradually become a lucrative vertical for start-ups, start-ups entering a gigantic, traditional market that desperately craves new tools and fresh ways to succeed.

During the past few years, the young and accelerating business has been rapidly revolutionising the local agricultural landscape, garnering worldwide attention in the process. As a leading agtech business, The Yield has won a major international award for innovation in agricultural technology, alongside an Internet of Things focused profile on BBC Future.

Through “creating public good with private effort” - as Harvey explained - the vision behind The Yield is simple, feed the world without wrecking the planet.

“My background in international development is littered with examples of people throwing money at problems and then the money dries up and it all collapses,” said Harvey, who founded the globally- recognised Better Work and Sense-T programs - both which have strong novel technology underpinnings.

“The holy grail is to answer how we can build things with communities that really meet their needs. That’s what we focus on and we achieve that by using platform technology that we can use over and over again, at scale.”

As a major agricultural producer and exporter, with over 325,000 employed in agriculture, forestry and fishing, agriculture and its closely related sectors earn in excess of $155 billion-a-year for around a 12 per cent share of GDP in Australia.

Specifically, Australian farmers and graziers own over 135,000 farms, covering 61 per cent of the country’s landmass.

“Everything that happens on a farm, impacts the whole food value chain,” Harvey explained.

“By working closely with customers and being able to stretch shelf life by one day, it’s worth millions across the food supply chain, and also reduces waste.

“We named the business The Yield for a reason. If you can’t have that effect, then you don’t have a business. The name really reflects our values and the way we approach technology.”

Designed to improve yields and reduce customer risk, The Yield’s solutions are powered by reliable, accurate and trusted data, targeting the agriculture and aquaculture industries specifically.

“Part of what The Yield does is take away the hassle,” said Harvey, who previously worked at the International Labour Organisation in Geneva, Switzerland.

“We provide an end-to-end service where we install our own hardware, service it, support it and make sure the data is curated.

“We then analyse it, transform it through predictions and then it drives these simple interfaces. Our unique differentiator is that in working with weather data, we do it at a very microclimate level such as the farm itself, the field and the plant right down to the row.

“If we do our job well, we are almost like magicians. It’s like everything disappears and all people have to focus on is the app.”

Whilst predictions and answers lie within the tech and the raw data itself, Harvey said that ultimately, the end solution for the industry as a whole, is underpinned by a commercial approach.

“There is so much data out there and it’s important,” she explained. “But what is arguably more important, is understanding the business problem that you are trying to solve.

“So we think about the decisions that are made on farms; when to plant, irrigate, feed, protect and harvest.

“We work closely with our customers to design apps and dashboards that help them make those decisions faster and hyper-contextualise it.”

The Yield released its first solution designed for the aquaculture industry in August 2016 – specifically targeting oysters - rolling out to 80 per cent of harvest areas across Tasmania, as well as in Pambula, New South Wales.

Harvey and her team used Microsoft’s Azure IoT Suite to power real-time sensors that sit in the oyster leases and analyse the water the oysters drink.

The information is ingested into Microsoft’s Azure cloud platform, where machine learning and advanced analytics capabilities make data- based predictions that are shared with growers and regulators via real-time dash-boarding.

“The regulator was shutting down harvesting to protect human health, but they were doing it using rainfall as a proxy and that rainfall could be coming from a public weather station that could be 100km away,” she explained.

“We put a salinity sensor, together with temperature and depth, in the water that the oyster is drinking so as the salinity goes down, it is a better proxy for runoff.”

Using data analytics, Harvey said The Yield’s technology is set to reduce unnecessary harvesting closures by 30 per cent, saving about $5.3 million a year for the Tasmanian growers’ $24 million industry.

Such innovation through intelligently collating and interpreting data has resulted in both the Tasmanian and NSW food authority’s coming onboard as key customers.

According to Harvey, The Yield offers an enterprise productivity tool designed for the regulators, pulled from the same knowledge infrastructure and data.

“We also give our data to researchers to create new knowledge and improve things such as animal husbandry and disease management,” she added.

“In return, we can take their algorithms that they create and can put them into our product. We essentially create a mini ecosystem.”

Given that the oyster industry represents a niche market, Harvey explained that the initial building of the platform was part of a wider plan.

“We describe oysters as an entree to your meal as it is to our business,” she said. “Now we’re pivoting into agriculture, with the same underlying business model of measuring things at the micro-climate level that matters, rather than having weather stations that are miles away.”

All systems go in agriculture

Subsequently, The Yield released its first tailored app for the agriculture industry, available on the Apple app Store and Google Play.

“Our app focuses a lot more on what growers’ care about,” Harvey said. “It’s not just a weather app - the core part of it is that we have developed evapotranspiration that measures the amount of water that a plant uses.

“Irrigators use this to help them understand how much they need to irrigate.”

Harvey said the interface offers data showing the past seven days of daily evapotranspiration, rainfall and water balance plus the weekly totals for each.

“It also shows the forecast evapotranspiration, together with the rainfall and water balance for each day,” she added. “This is a model that we run every six hours and we’re generating a million data points every time we do it.

“Users can now get today’s evapotranspiration based on our accurate model of approaching 90 per cent and they could never get this before.”

Fast-forward to 2017 and The Yield is now headquartered in Surry Hills, with staff in Sydney, Melbourne, Toowoomba and Hobart.

“We’re moving forward with the release of Sensing Plus, which allows us to predict using artificial intelligence and then build crop-specific apps,” Harvey added.

But in keeping with Harvey’s character, The Yield won’t be confined to Australian shores.

“How are we going to feed the world?” she asked. “We need to increase food production 70 per cent by 2050, when productivity in agriculture has been stagnant for decades and when we have to cope with growing input constraints and the unprecedented challenge of climate change.”