How close is the NBN to meeting Australia’s connectivity needs?

The NBN is almost halfway to completion, but will it meet Australia’s connectivity needs? 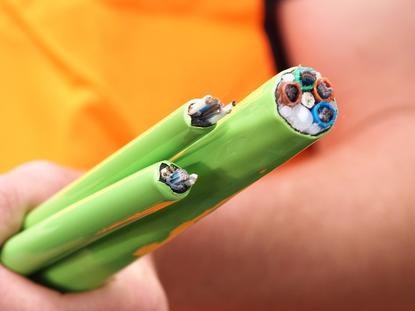 The company behind the construction of Australia’s National Broadband Network (NBN), nbn, revealed on 17 January that it expects the network to be 50 per cent complete by the end of June this year.

“By 30 June 2017, nbn is targeting a total footprint of 5.4 million homes and businesses,” the company said. “The network build is accelerating, with 277,000 homes added to the footprint last month [December, 2016] alone.

“The number of people able to connect will expand to 9 million homes by June 2018, with the end of the rollout then in sight,” it said.

With more than 70 per cent of the network’s rollout having hit regional and rural areas, nbn is preparing to ramp up the network’s deployment in metropolitan areas – no doubt a welcome development for those residents in Australia’s capital cities who are still waiting to be connected to the NBN.

“The intensified deployment will present challenges but the nbn team, along with our partners and retailers, is focused on a positive experience for customers and end users as we accelerate the build and connection rates to new records,” nbn chief, Bill Morrow, said in a statement.

With the rapid pace of the build over the coming months, nbn said it will face the additional challenge this year of deploying the network infrastructure in the higher density metro-areas where access to pits and existing infrastructure becomes more difficult.

This may mean disruption from civil works, visible for the first time in cities, the company said.

“As the nbn network rolls out into cities we will be met with new problems to solve,” Morrow said. “We understand there will be some disruption for residents and business owners as the 14,000 people working across nbn and our delivery partners complete the task as soon as possible.

“The payoff will be worth it, with universal connectivity delivering health, commerce, education and lifestyle benefits to all Australians,” he said.

While Morrow reckons the extra work and effort of rolling out the network in Australia’s cities will be worth it, the question remains: will the network itself be worth it?

As the largest and most expensive publicly-funded infrastructure project in Australia’s history, the NBN has had the unenviable honour of becoming a political football, used for point scoring by both sides of Australian politics.

While the NBN was introduced by Kevin Rudd in 2009, during his first stint as the country’s Prime Minister, its rollout plan was substantially altered when then opposition leader Tony Abbott became Prime Minister in 2013.

The initial price tag of the network build had been a major point of contention between the ruling Labor government and the opposition, with Abbott making it a priority in the lead up to the 2013 Federal Election.

When planning and work for the network’s rollout was first being undertaken by Rudd’s administration, the idea was that the network’s wholesale broadband service would be would be delivered predominantly via Fibre-to-the-Premises (FttP) infrastructure, with some fixed wireless and satellite coverage thrown in for hard to reach places.

Yet this plan changed when the Abbott and team won office, with then Minister for Communications, Malcolm Turnbull, subsequently introducing a multi-technology mix (MTM) approach to the network’s rollout, which included Fibre-to-the-Node (FttN), Fibre-to-the-Distribution Point (FttDP), and Hybrid Fibre Coaxial (HFC), among other delivery technology.

The move would see existing infrastructure used to connect homes and businesses to the network, including Telstra’s existing copper network and Optus’ HFC network – the latter of which has subsequently been found to be “not fit for purpose”.

The deal, under Turnbull’s MTM rollout, was that Australia would get the network finished faster, at a lower cost, than the previous model would allow. Rudd’s original plan, which was aimed at delivering the service to 93 per cent of Australian premises by 2021, put the total build cost at around $43 billion.

Although nbn later revised the capital cost of the build down to about $37.4 billion, in its latest annual corporate plan, the company placed its top end peak funding range between $46 and $54 billion. At the same time, the company is confident it will complete the rollout by 2020.

Forecasted costs and funding aside, the ongoing politicisation of the network’s rollout has polarised many Australians, with some accepting the government’s rationale for its MTM approach, others settling for nothing less than a mostly-fibre network, and the rest simply eager to have a new option for their internet connection.

Laurie Patton, CEO of Internet Australia, a not-for-profit peak body that aims to represent all Australian internet users, seems to fall into the middle category, taking the government to task over its current approach to the NBN rollout.

In a statement released on January 18, Patton blasted Morrow over nbn's warnings of civil works disruption in cities during the company's proposed metropolitan rollout push this year.

"The sad thing is that much of the disruption Mr Morrow is talking about would be avoided if they [nbn] immediately abandoned the rollout of their inferior copper wire FttN network," Patton said.

“Among other things, FttN requires electrical power to the nodes…This is presenting problems that contribute to the overall speed of the rollout and the level of local disruption.

"These nodes will be redundant and will have to be pulled out when the government inevitably bites the bullet and moves to fibre-to-the-driveway, or fibre-to-the-distribution-point (FttDP)".

Patton is not alone in his criticism of the current rollout model, yet others take a more moderate view of the government’s approach.

Intelligent Business Research Services advisor and former Gartner analyst, Geoff Johnson, suggests that the technology nbn has been trialling to help it push more data through copper wire is likely to take care of any speed issues over the coming years that the move away from a mostly fibre network might present.

While both the FttP and the MTM network approaches are aimed at delivering a network that offers download speeds of up to 100 megabits per second, it was expected that a mostly fibre network would be upgradable to gigabit-level speeds further down the track.

Given the perceived constraints of the existing copper network, nbn has, understandably, made a big show of demonstrating various technologies aimed at pushing ever more data through the metal cables.

According to nbn, XG-FAST can be used to deliver services to multi-dwelling units in a Fibre-to-the-Building (FttB) scenario, or via FttDP. The XG-FAST protocol is just one of a number of emerging technologies that nbn could tap into if it wants to pump up the speed capabilities of the existing infrastructure on which it has to rely under the government’s MTM approach.

Such technology will see some, if not all, of the NBN’s delivery infrastructure open to future speed upgrades, according to Johnson.

“Although the minimum design speed is 25/5 Mbps with at least 90 per cent of services capable of [over] 50Mps, only FttP and HFC services are upgradable to gigabit per second services in the near future using GPON and DOCSIS 3.1,” Johnson said in a research paper on the network, published late last year.

“The FttN network will need upgrading to FttDP (and G.fast) or FttP to achieve 1Gbps [or higher],” he said.

While new technology looks likely set to deliver future upgrade paths to much of the network under the MTM approach, a more pressing concern is the pricing of the network, which is yet to settle down to a level comparable to many other markets, according to Johnson,

“Its [the NBN’s] funding method and construction costs will create broadband access with higher prices than current ISP [internet service providers] charges and those of Australia’s trading partners,” he said.

“Australia has gone only part of the way towards creating abundant bandwidth by addressing coverage but not attractively-low prices.

“This leaves a national economic risk of relatively expensive and under-utilised broadband. Although national wholesale coverage is likely to be achieved by 2020 its funding model makes access ‘not cheap’ and ‘not compelling’,” he said.

Fleshing out this point, Johnson suggests that, the theory of an “optimum modern broadband economy” is that bandwidth should be widely available and priced so attractively that it is intuitively used in abundance by all sectors of society as “bandwidth to burn”.

“Relatively few economies have achieved that metaphor for bandwidth provision, and Australia is not one of them, as the near-term price of current access networks remains stubbornly expensive with speeds that are modest in global comparisons,” he said.

Yet Johnson suspects that the pricing issue may not be a lasting affliction for Australia’s NBN resellers and end users alike, with nbn likely to make some changes further down the track that will see prices fall.

“nbn Co is likely to change policy to provide interconnection from all POI [points of interconnect] to metropolitan areas in 2017 via its transit network to cut retail service provider (RSP) costs,” he said.

In the meantime, Australia has another three or so years to see how the remainder of the network’s construction pans out.

Given that the final build contracts have now been signed, nbn is optimistic that it will be finished on time and within its current budget range and, if all goes well, the network will meet its stated goal of connecting most of the nation to superfast broadband.