Shipments of 802.11ac wave 2 access points doubled in volume in the third quarter of 2016, as the newer wireless technology begins to reach further into the mainstream. 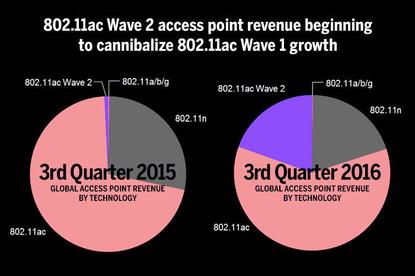 Shipments of 802.11ac wave 2 access points doubled in volume in the third quarter of 2016, as the newer wireless technology begins to reach further into the mainstream.

According to statistics from IHS Markit, the new tech accounted for about 10% of all wireless access points shipped during the third quarter, up from 5% in the previous quarter. That’s more than half a million wave 2 access points sold during those months.

Wave 2 is differentiated from earlier 802.11ac gear mostly by its use of multi-user MIMO, or multiple input, multiple output technology, which allows more than one antenna to service several different connections at once.

Among individual players in the WLAN market, IHS said that Huawei and Ubiquiti were the biggest gainers, though both companies remained well behind the big three of Cisco, HPE/Aruba, and Brocade/Ruckus.

Regionally, the researchers expect EMEA numbers to weaken in the near future thanks to Brexit, although North America has stabilized at a slight growth rate and Asia/Pacific remains the strongest growth market.

“Even so, the outlook for the WLAN market remains bright, as infrastructure investments over the long term will shift to WLAN equipment to support the rapid rise of wireless devices, both personal and for the Internet of Things, and also requirements for mobility,” the report said.