Some of the policy proposals may be wishful thinking, however 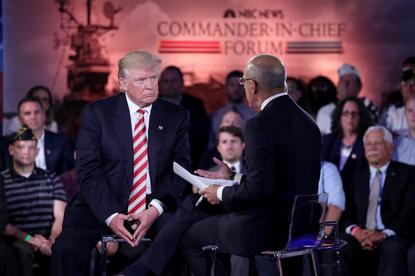 Technology trade groups are already pushing out their policy priorities for President-elect Donald Trump's administration, even though his campaign rarely touched on IT issues.

With Silicon Valley largely opposed to Trump during the campaign and his tech policy agenda paper thin, policy recommendations from tech trade groups may be an exercise in wishful thinking. Still, several tech groups congratulated Trump on his unexpected victory and expressed optimism about this presidency.

One point of optimism for the tech industry was the Trump campaign's last-minute addition of telecommunications networks to a long list of infrastructure projects he hopes to fund. Other infrastructure projects on Trump's list include roads, bridges, tunnels, airports, railroads, ports, pipelines, and the electricity grid, and it's unclear how he plans to pay for the plan, given that Trump also has promised large tax cuts, and whether telecommunications networks would be a priority.

Still, trade group USTelecom reminded Trump of the huge role the internet played in this year's campaign in its congratulatory note.

The trade group looks forward to working with Trump's administration "to advance his commitment"  to investments in telecommunications, USTelecom said by email. "This election cycle dramatically illustrated the critical role that broadband plays in our nation, providing millions of Americans an unprecedented ability to stay involved in campaigns for public office at the local, state, and national level – and enabling a new kind of citizen engagement in the democratic process."

Trump also talked briefly about cybersecurity during his campaign, giving one speech in October, and releasing a short policy statement at the same time. Trump questioned U.S. intelligence agencies for blaming Russia for hacks of the Democratic National Committee and other Democratic targets during the campaign, and at one point, he encouraged Russian hackers to "find" emails deleted by opponent Hillary Clinton.

Nevertheless, a Trump administration may be an opportunity to cut unnecessary regulations while building on a public and private partnership model already embraced by President Barack Obama's administration, said Larry Clinton, president of the Internet Security Alliance.

"We think the Trump election could be very progressive for cybersecurity policy," he said by email. It's unclear what priority Trump will give to cybersecurity, but "we do think on these issues there is cause for optimism."

In addition, Clinton expects the Trump administration to give cybercrime enforcement a higher priority than Obama has, Clinton said. The U.S. government is spending less than US$5 billion a year to fight cybercrime, while losses run into the hundreds of billions of dollars. A Trump review of cybercrime efforts should "begin to correct this imbalance," he said.

TechNet, a network of tech executives, congratulated Trump. "We must now turn to the hard work of governing and addressing the very real challenges and opportunities facing our nation," TechNet President and CEO Linda Moore said by email.

TechNet's priorities include tax reform, which Trump has called for, and high-skilled immigration reform, and the candidate has sent mixed messages about his views on worker visas. With Trump pushing for illegal immigrants to be deported, some experts believe any compromise on the often linked high-skilled visa issue is dead during a Trump presidency.

Moore also called for Trump to support computer science education and to build a culture that supports startups. Neither of those issues appears to be a Trump priority.

One of the more optimistic plans for a Trump administration came from the Software and Information Industry Association, which on Wednesday released an 11-page list of policy recommendations for Trump and the next Congress. Those 11 pages dwarf Trump's written policy statements on tech during his campaign.

The SIIA called for Trump to promote flexible cybersecurity practices and to engage in a dialog with the tech industry on the benefits and challenges of technology in law enforcement.

The trade group also called on Trump to maintain consumer privacy protections while allowing companies to innovate with their use of data.

Digital rights groups, however, worry about the impact of a Trump presidency on privacy. Trump has criticized Apple when it declined to assist the FBI with defeating encryption on a mass shooter's iPhone, and he's called for increased surveillance of Muslims living in the U.S. A centerpiece of Trump's campaign has been stopping illegal immigration, and his early calls to mass deport illegal immigrants also could lead to increased surveillance, critics have said.

Trump's plans to mass deport immigrants and increase surveillance on Muslims will be opposed,  Anthony Romero, executive director of the American Civil Liberties Union wrote in a blog post Wednesday.

"These proposals are not simply un-American and wrong-headed, they are unlawful and unconstitutional," Romero wrote. "If you do not reverse course and instead endeavor to make these campaign promises a reality, you will have to contend with the full firepower of the ACLU at every step."