Windows: When no growth is an improvement 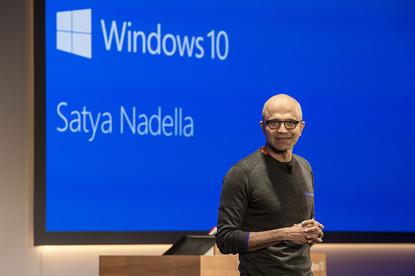 Microsoft yesterday said that revenue in the September quarter for the More Personal Computing group was down 2%, the second consecutive quarter of year-over-year declines and the fifth contraction in the last six quarters.

Windows revenue, which accounts for the bulk of More Personal Computing's (MPC) total, was flat. But that was an improvement over the prior quarter, when sales of the operating system were down 4%.

"Our total [Windows] OEM business was flat this quarter, more in line with the PC market and better than we expected," said Amy Hood, Microsoft's chief financial officer, during a call with Wall Street analysts Thursday.

Most of Microsoft's income from Windows comes from license sales to device makers, called OEMs for "original equipment manufacturers."

MPC -- one of three financial reporting groups -- recorded revenue of $9.3 billion, down from last year's $9.5 billion.

Much of the blame could be put on Microsoft's evaporating phone business, which was down $799 million, or 72%.

That disappearing act was nearly five times the difference between MPC's second- and third-quarter revenue: If the phone revenue had been what it was a year ago, the division would have posted a 7% increase for the period.

Hood forecast a continued contraction of phone revenue through the 2017 fiscal year, which began July 1 and ends June 30, 2017.

Nor did she have much hope for a near-term rebound in Windows revenue. "We expect our OEM business and the underlying PC market to be closely aligned," Hood predicted.

Research firms like IDC and Gartner have continued to forecast contraction, not expansion, in the PC business. Only when enterprise migrations to Windows 10 kick into gear do analysts see a reversal of the industry's historic slump. That isn't expected to happen until next year.

Jack Gold, principal analyst at J. Gold Associates, agreed, citing his firm's data on enterprise adoption of Windows 10, and commentary by Intel during its latest earnings call, when the chip maker said enterprises were only just starting to replace aged PCs.

Also in play -- and a boon to Microsoft -- is a subtle shift by consumers toward higher-priced PCs, Gold argued in an email: "[That] translates into higher-level licenses for Microsoft."

Other analysts have pointed out that some consumers are choosing more expensive systems, crediting those decisions to a realization by buyers that they will hold on to their new PCs for much longer than prior purchases, and so are willing to pay a premium price for something that will last six, seven or even eight years.

"The PC space is still stagnant but not as bad as some had predicted," Gold said. "[As] more companies migrate to Windows 10 over the next six to 12 months, that will mean more enterprise PC refresh as most companies will buy new machines rather than upgrade just the OS."