Minnesota Vikings aim to deliver content and services to fans, from their driveways to their stadium seats 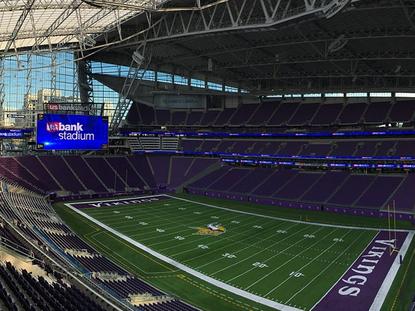 The new $1.1 billion home of the Minnesota Vikings aims to deliver the space and technology for the ultimate fan experience. It has the requisite modern stadium features – slick club spaces, luxury suites, and a wide range of food and beverage options – plus some unique additions, including an interactive exhibit space that lets visitors test their athletic prowess, a fantasy-football video board so ticket-holders can keep tabs on all the league action, and a transparent roof that helps flood the space with natural light without exposing occupants to Minnesota’s bitter winter temps.

"We didn’t want to get caught in the trap of saying this is the most advanced stadium around, because the reality is that a lot of what we're putting in the stadium, there are bits and pieces of it that are being used all over the world in some way, shape or form,” said John Penhollow, vice president of corporate & technology partnerships with the Minnesota Vikings. “That said, how could we bundle all of the stuff… in such a way that it enhances the experience?"

The effort starts with pervasive mobile and wireless coverage.

A neutral-host distributed antenna system (DAS) from Verizon Wireless is designed to create an even playing field for major wireless carriers. “We can't get away with having you come in the building and only getting one bar or two bars on your phone. It needs to work, and you need to use it,” Penhollow said of the DAS from Verizon. "It shouldn't matter who your carrier partner is, whether it's Verizon or AT&T or Sprint or T-Mobile, you should be able to come into the building and have a great, powerful signal."

To boost wi-fi coverage, there are 1,300 CenturyLink access points installed in slim, proprietary “clamshells” that are built into the stadium handrails. The stadium, which seats 66,200 people, is designed to accommodate all fans on their devices at one time, but actual use is expected to hover at about 30,000 fans during a regular season Vikings game. "Theoretically, all 66,000 of us at a Vikings game could jump onto the Wi-Fi," Penhollow said.

Burstable bandwidth will be tapped for special events, when seat capacity is expandable to 70,000.

Fans can make use of the mobile and cellular infrastructure to tap the Vikings’ stadium app. Powered by VenueNext, the app lets users stay on top of team news, stats, video clips and podcasts. New features, tied to the completion of the stadium, include tools to download tickets, watch instant replays, get driving directions, and navigate the stadium.

The app also allows fans to order food and drinks from their seats and select express pick-up service rather than waiting in line to order at concession stands. In the future, fans will be able to have food and beverage orders delivered to their seats. To enable all these features, the app integrates functionality from Ticketmaster, Aramark, point-of-sale solution Appetize, seat-upgrade tech Experience, loyalty company Skidata and content app developer Adept.

When fans are on the move throughout the stadium, they’ll find 2,000-plus TVs mounted throughout the building. There are also two giant LED video boards are positioned above the end zones – as low as possible so fans don't have to look far away from the action on the field. They're "very, very low to the field, about as low as we could possibly push it without getting a call from the league office," Penhollow said. The west video board measures 120’ x 68’ and ranks as the 10th largest in the NFL.

Still under construction is Vikings Voyage, a 10,000 square-foot interactive space for fans that will be free for all ages and open during Vikings events. Visitors to Vikings Voyage will be able to play games, including catching passes while wearing a virtual reality Vikings helmet; running a three-cone drill against a current Vikings player’s pace; and hitting a tackling sled that measures impact force. RFID wristbands will allow fans to track their scores and compete against other players.

Positioned outside the west entrance of the stadium, the Legacy Ship is a 160-foot long sculpture inspired by Viking ships. The ship’s sail functions as a stadium marquee; on the street-facing side is a 2,000 square-foot curved LED video board.

To maximize natural light, U.S. Bank Stadium features the only ETFE (ethylene-tetra-fluoro-ethylene) roof on a sports facility in the U.S. – and it’s impressive. Transparent ETFE is designed to let in light, like glass, but it’s a lighter and more economical material than glass. It’s also self-cleaning, according to the stadium. ETFE is used on the entire south side of the stadium’s roof and 60% of the total roof surface, creating an light-filled atmosphere in a climate-controlled environment.

The exterior walls of the 1.75 million square-foot stadium are made from zinc metal panels, which will patina over time, and 200,000 square feet of glass and glazed curtain walls. A highlight of the exterior is Legacy Gate, which is made up of five of the world’s largest glass doors. The doors range from 75 to 95 feet tall, weigh 57,000 pounds apiece, and contain 10 smaller doors that can be used in inclement weather.

Dallas-based HKS Architects designed the stadium, which is slated to host Super Bowl LII in 2018 and the NCAA Final Four in 2019.

The architects looked to Nordic vernacular architecture, Minnesota culture, and local environmental conditions for their design inspiration. For example, the stadium’s dramatically sloped roof is designed to shed snow, similar to traditional Nordic roof structures. The overall angular volume of the stadium is reminiscent of the jagged geometry of ice flows colliding on frozen lakes.