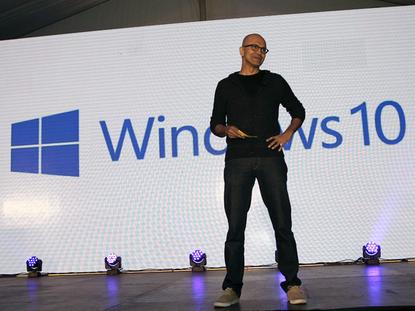 Microsoft today acknowledged that it would not make its self-imposed goal of putting Windows 10 on 1 billion devices by mid-2018.

"We're pleased with our progress to date, but due to the focusing of our phone hardware business, it will take longer than FY18 for us to reach our goal of 1 billion monthly active devices," a Microsoft spokesman said in an emailed statement.

"In the year ahead, we are excited about usage growth coming from commercial deployments and new devices - and increasing customer delight with Windows."

The billion-or-bust goal was first breathed in May 2015, when Terry Myerson, the company's top operating systems executive, said, "Our goal is that within two to three years of Windows 10's release there will be one billion devices running Windows 10." Microsoft launched Windows 10 on July 29, 2015, putting the two- and three-year timelines at mid-2017 and mid-2018.

Microsoft's latest numerical claim for Windows 10 was 350 million at the end of June.

"The change we just saw was inevitable, not just because of Windows Phone but also because PC shipments are declining," said Merv Adrian, an analyst at Gartner.

As Microsoft mentioned -- the "focusing of our phone hardware business" -- the goal was predicated on a significant number of Windows 10-powered smartphones to add to the personal computers that will be upgraded or replaced. But Windows smartphones never captured more than a tiny fraction of the market.

In response, Microsoft abandoned all but the enterprise market two months ago, albeit only after bleeding billions in losses and write-downs. And as Adrian noted, the PC shipment slump shows no signs of relenting, putting the squeeze on Windows' stronghold.

Still, today's admission was a public relations gaffe at the very least, said J.P. Gownder of Forrester Research. "It was probably not the wisest thing to set this expectation," Gownder said. "I think Microsoft saw it as more aspirational than as a metric, but once they put it out there, people tracked it as a metric."

But was it more than that? Not to Gownder.

"On some level, I don't think it's a huge deal," Gownder said, noting that with the demise of Microsoft's original smartphone strategy and the shrinking consumer PC market, it was simply realistic.

Meanwhile, Adrian argued that it was also indicative of the way Microsoft now does business.

"They've changed a lot of things [since Satya Nadella became CEO], broken down a lot of silos and opened the transparency gates," said Adrian. "They're more open than they used to be. This is a course correction, but in the public eye."

It's in the public eye because Microsoft put it there, of course, by openly drawing a line in the sand rather than keeping it internal. But it wasn't the end of the world.

"This needs to be put into context. All businesses have to do [course corrections]," Adrian said. Businesses constantly monitor internal goals and the milestones toward those goals, whether company-wide or on a project basis, whether financial performance or unit sales. They ponder what has been done, and if those actions haven't advanced toward the goal, they rethink.

That's what Microsoft has done, Adrian said. The difference? "They want to be public," he said, again hitting his theme of a more transparent Microsoft.

Yet Adrian also admitted that there is a public relations aspect to the goal being ditched. "It's about how well you recover," he said. In the early stages of Windows 10, Microsoft was slow to respond to criticism -- such as the charges of widespread data collection -- or even intractable, as with the aggressive, even deceptive upgrade tactics it has employed. Today's declaration was more preemptive; it may have been triggered by questions from people like Bott, but Microsoft could, as it often has, simply stonewalled.

Instead, Microsoft owned up. And learned a lesson.

"If you draw a line in the future sand, and that line is at the water line, the next wave can wash it away," said Adrian.