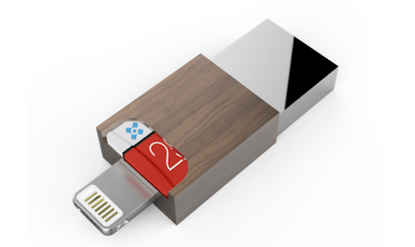 A new USB thumb drive that can connect to Apple iPhones and iPads or Android mobile devices offers up to 512GB of external storage with 5Gbps data transfer speeds via USB 3.0.

The Corsdrive thumb drive is being offered through an Indiegogo crowdfunding campaign, which has a $2,000 flexible goal. After one day, the 30-day campaign has already raised about $10,000.

The Corsdrive also features two-way data transmission, meaning you can plug one end into a mobile device and the other one into a laptop or desktop computer via the USB 3.0 plug and transfer files.

The two-way transmission also means the thumb drive can be used to charge mobile devices, such as an iPhone, iPad, Android, or Tablet directly from any USB outlet.

"Most people need more space because of heavy downloading stuff like Apps, music or YouTube videos," Corsdrive said on its Indiegogo campaign page. "Copy, store, clone or backup all your videos, photos, contacts, everything: for security, privacy, convenience. Plays and opens media files without needing to first be copied onto another iPhone, iPad, iPod, Android phone or tablet, even Mac or PC."

The Corsdrive is also unusual in that it doesn't have a fixed capacity; the thumb drive uses a microSD card slot, so it can go from 8GB to 512GB just by switching out the card.

Along with capacity and file-transfer capabilities, the Corsdrive offers a native file encryption algorithm to passcode protect data stored on it.

The drive plays and opens media files without requiring they first be copied onto another iPhone, iPad, iPod, Android phone or tablet, whether Mac or PC, the company said.