You might be familiar with the Cell on Wheels (COW) concept that carriers have deployed to bring temporary wireless service to busy venues or disaster relief areas. Now AT&T is giving the COW acronym a new high-flying meaning: Cell on Wings. 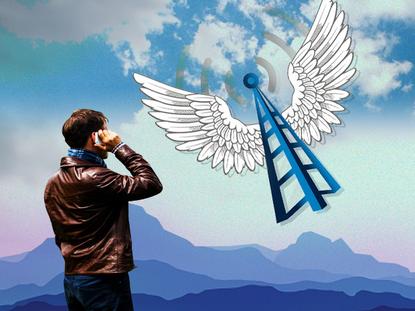 You might be familiar with the Cell on Wheels (COW) concept that carriers have deployed to bring temporary wireless service to busy venues or disaster relief areas. Now AT&T is giving the COW acronym a new high-flying meaning: Cell on Wings.

The carrier at its Shape Tech Expo at AT&T Park in San Francisco this week provided an update on its drone (unmanned aerial vehicles) efforts, including what it calls flying COWs. John Donovan, chief strategy officer and group president for AT&T Technology and Operations, wrote in a blog post that AT&T this week was starting the trial phase of its national drone program.

"Connecting drones to our nationwide LTE network lets us capture data and feed it directly to our systems. In turn, this can allow us to make changes to our network in real time," according to Donovan.

This echoes what another AT&T official told us in May about the carrier's drone intentions, including plans to support assorted internet of things applications.

With flying COWs, AT&T refers to tethered drones that would boost LTE cell coverage at events such as concerts where people amp up the selfies and videos. Of course, most such venues actually have bans on drones right now for safety reasons, so AT&T would need to do a bit of negotiating (of course it might be on the inside track at AT&T Park, for starters).

Flying COWs would be in addition to existing AT&T drone-related efforts, such as for cell tower inspections.

AT&T and Intel said during Mobile World Congress in February that they have joined forces to test how UAVs equipped with Intel modems and crash avoidance technology work over AT&T’s LTE network.

AT&T and other tech companies have been buoyed by FAA regulations published last month that will allow more freedom for those who would use drones commercially. Verizon, for example, is working with NASA on its development of Unmanned Traffic Management solutions and investing through Verizon Ventures in startups such as PrecisionHawk, which provides aerial data and safety platforms for commercial drones, with an emphasis on users in the agriculture, insurance and telecom industries.