Tesla admits Autopilot was on during latest Model X accident

A second accident involving a Tesla vehicle with its autonomous driving feature engaged took place Saturday near Cardwell, Montana when the car swerved and hit the guard rail. 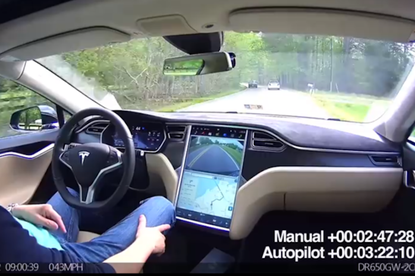 Tesla has confirmed that another of its all-electric vehicles was involved in an accident while its advanced driver assistance system (ADAS), which it calls Autopilot, was engaged.

The second accident involving Autopilot comes less than two weeks after Tesla revealed the feature was also involved in a fatal crash that took place in May. It is unclear whether anyone involved suffered injuries in the second crash.

The latest accident, which took place around midnight on Saturday near Cardwell, Montana, involved a Model X -- a gull wing-style SUV -- which allegedly suddenly swerved into a wooden guard rail, crushing the right side of the vehicle. Tesla, which receives cellular data from vehicles, claims the driver did not have his hands on the steering wheel at the time of the accident, which the carmaker recommends drivers do at all times.

"The data suggests that the driver's hands were not on the steering wheel, as no force was detected on the steering wheel for over two minutes after Autosteer was engaged -- even a very small amount of force, such as one hand resting on the wheel, will be detected," a Tesla spokesperson told the BBC. "As road conditions became increasingly uncertain, the vehicle again alerted the driver to put his hands on the wheel. He did not do so, and shortly thereafter the vehicle collided with a post on the edge of the roadway."

Musk said Tesla had no plans to disable Autopilot, and one report indicated the company plans to further clarify proper use of the feature in an upcoming blog.

Tesla has been criticized in news reports for not being more swift to publically disclose the earlier fatal crash, and some have questioned whether Autopilot is safe to use.

Musk has defended Tesla's Autopilot technology, stating that among all U.S. vehicles there is a fatality every 94 million miles. This is the first known fatality in just over 130 million miles where Autopilot was activated.

"To be clear, this accident was the result of a semi-tractor trailer crossing both lanes of a divided highway in front of an oncoming car. Whether driven under manual or assisted mode, this presented a challenging and unexpected emergency braking scenario for the driver to respond to," Musk wrote in a blog regarding the fatal crash. He added that there was no evidence to suggest that Autopilot was not operating as designed.

The U.S. Securities and Exchange Commission (SEC) has opened an investigation into why Tesla took nearly two months to publicly disclose a fatal crash that took place May 7, according to a Wall Street Journal report this week.

Tesla said in a statement on Monday that it has not received any communication from the SEC regarding an investigation. The SEC today declined to comment when contacted by Computerworld.

While Tesla didn't initially publically disclose the fatal crash, which took place in Florida and killed 40-year-old Joshua Brown, nine days after it took place it did report it to the National Highway Traffic Safety Administration (NHTSA); the NHTSA is currently conducting its own investigation into the incident.

The NHTSA is also looking into another accident that took place in Pennsylvania on July 1 involving a Model X in order to determine if Autopilot was on at the time. State police said the Model X initially struck a guard rail on the turnpike and then veered across several lanes and into the median, where it rolled onto its roof in the middle highway. The driver and a passenger were injured, according to the police report.

Tesla said that "based on the information we have now, we have no reason to believe that Autopilot had anything to do with this accident."

Tesla has emphasized that the Autopilot feature, which has lane-keeping and automatic braking capabilities -- among others -- is a driving-assist feature and is not intended to be used as a fully autonomous vehicle technology.

Musk and Tesla have taken heat in some published opinion pieces that called into question the ethics of not reporting the fatal crash sooner.

"The company and its founder knew about the fatal crash when it sold $2B of stock in May," a Fortune article stated.

A recent Tesla SEC filing stated it could "become subject to product liability claims, which could harm our financial condition and liquidity if we are not able to successfully defend or insure against such claims."

In a blog post, Musk responded to the Fortune article, calling it "fundamentally incorrect" and a mischaracterization of Tesla's latest filing with the SEC.

Tesla, which retrieved log data from the vehicle, stated in a June 30 blog that the Model S's autopilot sensors failed to detect the white semi-truck as it turned in front of a sedan with a bright sky behind it. The Model S's top was sheered away as it traveled under the truck and continued on for several hundred yards.

However, Musk told The Wall Street Journal that his company would publish a blog highlighting how drivers should make use of the technology.

In the latest accident, the driver of a Model X claimed he traveling with the Autopilot on at 50mph to 60mph when his Model X suddenly veered into a wooden guard rail, which crushed the right side of the SUV.

The driver of the Model X, who was not injured, posted photos on the Tesla Motors Club website of the damage at the crash scene, and a person self-identifying as a friend of the driver posted details about the accident there as well.

"Both 2 people in car survived. It was late at night, Autopilot did not detect a wood stake on the road, hit more than 20 wood stakes, tire on front passenger side and lights flyed away," the post stated. "His car is completely destroyed. The place he had accident does not have cellphone signal, it is 100 miles from the hotel."

The driver, according to a Wall Street Journal report, was traveling from Seattle to Yellowstone National Park in Montana.