[Updated] Labor has ruled out a Royal Commission into the NBN

Negligence not criminality according to Clare 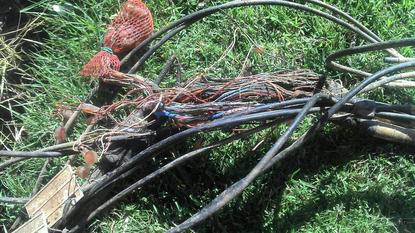 The justifications to implement Fibre to the Node in Australia defy reality. Source: MAGILLA (CANOFWORMS.ORG)

Many people continue to call for Labor to order a Royal Commission into the NBN should they return to power. It’s not surprising why… the $36bn FttH national rollout has turned into a $60bn failed upgrade to the existing copper network with many questionable individuals getting rich along the way. Furthermore, the justifications for doing this have been grounded in so much misinformation, incompetence and downright lies, that some decisions defy reality.

But we asked Jason Clare about this all the way back in March at the Tech Leaders Forum in the Blue Mountains and we confirmed the response today with Labor’s Media office. It hasn’t got any media attention at all so it’s a good time to set the record straight. The conversation went like this:

Nick Ross - “[The Coalition’s broadband policy] has cost us tens of billions of dollars directly and arguably trillions overall [slight exaggeration! – ed] in benefits that could have happened. In light of this, are you considering doing a Royal Commission when you get back into power?

Jason Clare - “No. People like Tony Abbot are interested in going down the path of politically-focused Royal Commissions. What I’m interested in is getting the best possible broadband outcome for the Australian people rather than do that.”

NR - “But it’s not a political thing when literally tens of billions have literally been wasted and justified by lies?”

JC - “You know what? People don’t care about that, people want the NBN and they want a service that’s going to be good enough for their needs for five years, ten years, fifteen years, twenty years. One of the other things Malcolm Turnbull did was he promised that he would get an independent body – in particular he said, Infrastructure Australia would be the body that he would get to do the Cost Benefit Analysis. Now, after the election, they decided that instead of the doing that they’d get the Vertigan Panel, which included people that worked in the past with Malcolm Turnbull...”

NR - “Isn’t that criminal to get your mates to do the job?”

JC - “No. I think what we’re seeing increasingly in all of these leaked documents is negligence on the part of Malcolm Turnbull and this government for going down the path of switching from building a first-class network to a second-class network.”

Despite there subsequently being further leaks and political fallout over nbn-company-instigated raids on Labor offices and the nbn company CEO being cited recently for breaking political neutrality rules, we asked Labor’s office if they’d now consider launching a Royal Commission and they said, “No.”

We also asked the Green’s whether they’d push for an NBN Royal Commission. Their response can be seen, here.