ISVs are of high value for the distributor moving forward 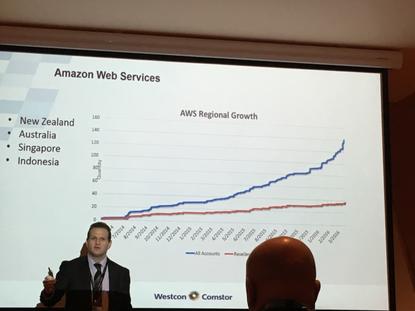 Westcon-Comstor is increasing its commitment to the Cloud movement and urges partners to get on board, according to its Asia-Pacific vice-president of Cloud and services, Darryl Grauman.

Grauman used his breakout session at the distributor's Imagine 2016 conference to reiterate the company's commitment, discussed the distributor's relationship with Amazon Web Services (AWS) and addressed how partners can leverage it to drive opportunity and growth.

“We have a single volume account with AWS globally which means we have the ability to bring the leverage of some of the massive markets overseas back to down under. We have injected Cloud DNA into our business,” he said.

According to Grauman, moving customers to the Cloud as one option of renewal is now simply ‘just another method of doing business’ and it is the strong adoption of Cloud within A/NZ that has propelled progress since 2015.

“So far in our Cloud practice in A/NZ only, we are looking after and helping build and transact more than 2000 servers, 1.2 petabytes of data and 200 databases. How much do you think that spend would have been in the old world of CAPEX?” he asked.

Grauman claimed the equivalent value in hardware and maintenance spend would be $30 million and of the 172,000 new businesses registered in Australia in 2015, none would be purchasing hardware.

Consequently, Grauman claimed that independent software vendor (ISV) partners were highly valued by the company and crucial to its continuing success.

“The partners that we have now are fantastic. What makes me get up and out of bed everyday is not only finding the new stuff from our current partners but discovering new, innovative partners like ISVs that are building on platforms like AWS.”

He also revealed that the distributor plans on upgrading its BlueSky platform within A/NZ.

“Version four is a massive leap ahead for us and we are basically taking piloted partners on the journey over the next few months to move into this new version,” he said.

“BlueSky isn’t just a digital distribution system, it is a business management tool. It enables resellers to plot a cause for their business to understand their profitability of Cloud services by managing all types of subscription, end user and customer acquisition and retention.”