​EMC World 2016: Joe Tucci bows out as EMC looks to the future 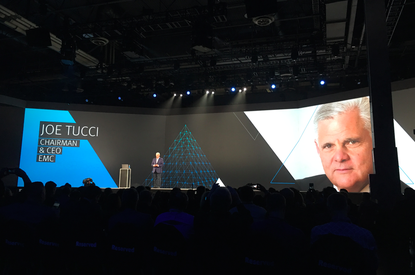 In starting proceedings with a video looking back at the history of EMC World, Tucci smiled upon its close, warning attendees that this wasn’t a swan song as such.

With a $US27 million golden parachute payment heading into Tucci’s top pocket post the Dell acquisition, the commanding CEO looked every bit his usual self in front of a typically vocal American audience in Nevada.

In keeping with theme entitled ‘Modernise’, the veteran discussed the modernising of the industry, IT and the business, offering insight into where the storage giant sees the future of technology in 2016 and beyond.

“I can tell you now, this isn’t the end of something great, it’s the beginning of something truly special,” he said.

While acknowledging “important Government approvals and shareholder votes”, Tucci said the success of the $US67 billion merger will depend on the reaction of the company’s customer base and partner ecosystem.

“You all vote every quarter with your business,” he admitted. “You’re the only ones that can make this merger successful, so vote for us.”

In addressing the key elephant in the room, Tucci rhetorically asked attendees - “Why the merger? Why Dell? Why now?” - before picking each point off in his typical no-nonsense style.

“Once in every two or three lifetimes, everything changes,” he said. “The industrial revolution came around and went on for a 100 years with the modernised powered machinery allowing men, women and children to change the world.

“Many new companies were born out of this and right now we’re on a shift that will dwarf even the industrial revolution. Creating this revolution is the millions of connected devices out there in the world.”

As Tucci explained, this will continue to grow and when such connected devices throw out a “treasure trove of data”, how companies interpret such information will be the deal breaker.

“How businesses collect that data and become more innovative with their customers will change the whole business model,” he said. “This is the revolution we are in now - the digital revolution.”

Consequently, Tucci said the merger will Dell will provide a “great chance to extract the best of both companies”, with the aim of creating something “incredibly differential” in the market.

“If you look at the magnitude of data processed and the need for this to be interpreted in real-time, the outcome is a new style of computing,” he added.

“We have to change not only very rapidly but very dramatically and on a personal note, it’s been an incredible journey.

“I thank our partners and customers as this will be the last time I stand here at EMC World as EMC Corporation CEO and Chairman.”

In departing to a standing ovation, Tucci’s final line was simple; “The best years are head of us and I’ll be around to help in any way I can.”

James Henderson is attending EMC World 2016 as a guest of EMC.