Profit before tax comes in a head of forecast 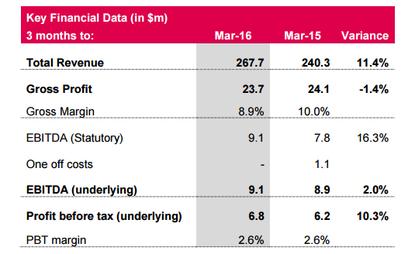 Dicker Data has reported an excellent start to the FY 2016 with first quarter (Q1) profit before tax coming $1 million in ahead of forecast at $6.8m.

In a filing on the ASX, the distributor reported that revenue for the quarter was $267.7m, 11.4 per cent higher than the comparative quarter last year. It said this was partly the result of realising full value of new vendors introduced during 2015 and strong performance with existing vendors.

Profit before tax (PBT) was 10.3 per cent higher than comparative quarter last year and the PBT margin was maintained 2.6 per cent.

Chairman and CEO, David Dicker, commented that from a revenue and profit perspective, Q1 is traditionally the slowest quarter of the year, with Q2 being one of the strongest quarters.

"With our Q1 achievement tracking ahead of our forecasted number of quarter, we are confident that pre-tax profit of $35 million for FY16 will be achieved. Assuming an average tax rate of 30 per cent NPAT is forecast $24.5m, equating to 11 per cent growth on underlying growth."