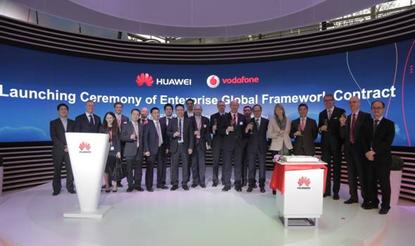 Vodafone has signed a global framework agreement with Huawei to extend the over 10 year relationship between the two companies in a move targeted at gaining market share in the enterprise.

The agreement, announced at CeBIT 2016, will widen the range of co-operation and to target enterprise customers in the areas of fixed and mobile connectivity, narrow band IoT, and total communications solutions.

Vodafone global enterprise chief executive, Jan Geldmacher, said: “It is pleasing to be able to extend this agreement and I am looking forward to further success in the future.”

Huawei president of Vodafone account department, James Chen, said after more than 10 years of successful partnership between Vodafone and Huawei, the extension of the capability to co-operate in the Enterprise space will promote even greater success for the two organisations to win business together.

Huawei’s main play in the enterprise space is in the Datacentre market, to which it provides converged infrastructure, storage and networking.