Apple vs. the FBI: The legal arguments in a nutshell 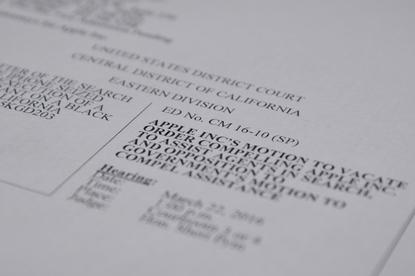 Apple has raised some interesting, and potentially winning, legal arguments in its motion to overturn a US judge’s order requiring the company to help the FBI unlock the iPhone of a mass shooter.

The FBI's request for Apple to write new software to defeat password protections on the phone violates the company’s free speech and due process rights, Apple argued Thursday in its motion to vacate Magistrate Judge Sheri Pym’s Feb.16 order.

Apple has a chance to prevail in court, especially with its First Amendment free speech argument, said Jennifer Dukarski, a technology lawyer with the Butzel Long law firm in Ann Arbor, Michigan.

Several past court cases have looked on software code as a form of speech, although the legal record is mixed, she said. Apple argues the court cannot force speech from the company, particularly when the speech would be against Apple's own interests.

“Clarity on this issue would help all who write and defend those who write code,” Dukarski said. “If the code is treated as speech, I think Apple has a strong position against compelled speech.”

Still, the company has an “uphill battle” with Pym after her initial order requiring Apple to help unlock the phone, said Braden Perry, a lawyer specializing in federal enforcement cases with Kennyhertz Perry in Kansas City.

The First Amendment argument could carry weight because the government needs a “compelling” interest to force Apple to write new code, he said. Apple argues that the FBI has produced “nothing other than speculation that the compelled speech could produce fruitful information.”

It’s important to consider the bigger picture than this one case, Perry added. “The majority of the argument is about balancing the needs of law enforcement with the privacy and personal safety interests of the public,” he said.

Following are some of the main legal issues.

What’s the FBI’s argument? The FBI’s request relies heavily on the All Writs Act, a U.S. law dating, back to the late 1700s, allowing courts to "issue all writs necessary or appropriate in aid of their respective jurisdictions and agreeable to the usages and principles of law."

The All Writs Act gives judges wide latitude to compel parties to cooperate in cases before them, but there are limits. The judge must have no other legal options available, the target of the writ (Apple) must be closely connected to the case, and the court order cannot impose an undue burden.

Apple’s participation is necessary to access the phone, Department of Justice lawyers representing the FBI argue. “Here, the government has obtained a warrant to search the phone of a mass murderer, but unless this Court enforces the Order requiring Apple’s assistance, the warrant will be meaningless,” DOJ lawyers wrote in a stinging rebuke of Apple filed Feb, 19.

The bigger issue: More broadly, FBI Director James Comey and other officials have called for a policy debate about criminals’ use of encrypted communications to shield law enforcement from their activities.

Beyond this case, the larger issue is “really about who we want to be as a country, and how do we want to govern ourselves?” Comey said during a congressional hearing Thursday. Investigators increasingly can’t read the communications of “terrorists, gangbangers, pedophiles, all different kinds of bad people,” he said.

Apple argues that the FBI request, if successful, will open the door to hundreds of similar requests from investigators across the country and the world.

“This is not a case about one isolated iPhone,” the company’s lawyers wrote Thursday. Instead, the FBI is seeking “a dangerous new power” to force Apple and other tech companies to undermine basic security and privacy protections.

Apple vs. the All Writs Act: The company argues Pym’s order ignores several limits on the All Writs Act. The act does not give courts new authority to compel assistance beyond that already authorized by Congress, Apple says.

In addition, the judge’s order is “unreasonably burdensome,” and would require Apple to create a new operating system, tying up six to 10 of its employees for up to a month.

Apple is also “far removed” from the terrorism and mass shooting case being investigated, its lawyers argue. “The All Writs Act does not allow the government to compel a manufacturer’s assistance merely because it has placed a good into the stream of commerce,” they wrote in their appeal. “Apple is no more connected to this phone than General Motors is to a company car used by a fraudster on his daily commute.”

Apple’s First Amendment argument: The company points to several court cases where judges have considered code as a form of speech. It’s a violation of the First Amendment to force speech, the company’s lawyers argue.

Apple’s Fifth Amendment argument: The due-process claims are a bit tougher to follow, but they go like this: The Fifth Amendment protects U.S. residents against the government taking away their liberty. The requested order would require Apple to “do the government’s bidding” in a way that’s burdensome and violates Apple’s “core principles,” its lawyers argue.

What happens now? Judge Pym has scheduled a hearing on Apple’s appeal for March 22 in Riverside, California. It’s almost certain that her ultimate decision will be appealed by the losing side. The case could go then to a district court judge, and if challenged there, to the U.S. Court of Appeals for the Ninth Circuit. Ultimately, the case could end up in the Supreme Court, many legal experts have predicted.