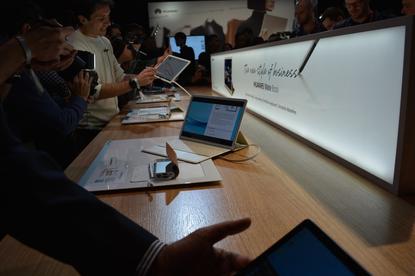 Huawei’s challenge to Microsoft, Samsung and Apple in the premium tablet market, the MateBook, is an impressive little unit at first glance but will it be able to take on the established players and gain market share?

We will say this for the MateBook, it is a beautiful looking unit. The sleek design and bezeled edges give it a premium look and feel. The colours are vibrant and the screen is responsive to the slightest touch as we have come to expect from the current crop of devices in this category.

The style continues on to the keyboard/cover that comes in brown, black, beige or orange. The leather is supple and when wrapped around the device, looks elegant. One of the most impressive features of the keyboard/case is that it can be positioned at two different angles, 52 and 67 degrees. This makes it comfortable if used on a desk or on your lap.

The keyboard itself has a 1.5 mm key depth which is better than the its rivals and makes typing much more akin to a traditional laptop than a 2-in-1. It is also water resistant however, Huawei were not too keen on us tipping a bottle of water on the unit to test its claims.

To make the unit as slim as possible, the MateBook has the vast majority of its ports in a separate unit called the MateDock. This is a clever feature but the dock is sold separately as is the MatePen and keyboard which makes the complete package a rather expensive prospect for people who want the full array of features the device has to offer.

The MateBook is a great looking and functional unit but initial pricing puts the high-end model right at the top of the premium tablet market and we suspect that all the features will not be enough to tempt consumers away from the more established 2-in-1 manufacturers despite its superior features.