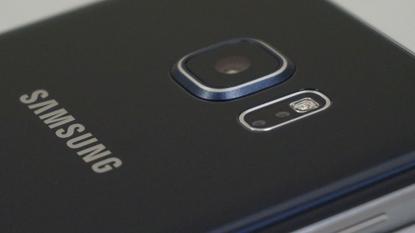 Samsung's next flagship Galaxy smartphone, the S7, is expected to be announced next year amid predictions that it will have the faster Snapdragon 820 processor and will restore the storage expansion slot.

What's more, the Galaxy S7 may be priced as much as 10% less than the Galaxy S6 when it was introduced in March. A lower price, alongside a dramatic improvement in performance, could help Samsung's sagging global market share, now at about 21%, down from 32% two years ago, according to IDC.

"Many people were angry about Samsung removing the SD card in the Galaxy S6, but I believe we will see that come back to the S line with the S7," said Patrick Moorhead, an analyst at Moor Insights & Strategy, in an interview on Monday.

The Qualcomm Snapdragon 820 for the Galaxy S7 would only run on versions of the phone sold in the U.S. and China, with other versions sold elsewhere running Samsung's own Exynos 8890, according to various reports based on leaked model numbers of the Galaxy S7. The leaks make the reports of an 820 chip more reliable.

Moorhead said the 820 offers a dramatic improvement over previous Samsung Galaxy smartphones and could pose a challenge to the Apple A9 system on a chip used in recent iPhones.

"This is not just a classic improvement in the next-generation smartphone feeds and speeds, but a dramatic improvement and Qualcomm talked about doubling the performance per watt on this card," he added. The improvement will benefit virtual reality (VR) as well as streaming media and Web-based media. "It is really a big deal," he added.

Qualcomm introduced the 820 in November, but neither the chip maker nor Samsung have officially confirmed it will be used in the Galaxy S7. Qualcomm described the 820 as offering faster LTE upload and download speeds as well as better graphics performance, with an Adreno 530 processor and a 2.2 GHz, quad-core 64-bit Kryo central processing unit.

Using a widely known benchmarking test from Geekbench, the 820 with quad cores received a 5423 performance score, compared to 4454 for the Apple A9, according to reports.

With a faster 820 helping video streaming and VR, the addition of a micro SD slot in the S7 would be valuable, Moorhead said. "It was particularly dumb to remove the slot in the S6 given the emergence of 4K video on smartphones," Moorhead said. Ultra-high definition video, also called 4K, will require a "monumental amount of storage," which can be stored on a 128GB micro SD card, or even larger ones coming to market.

The new Galaxy S7 could be announced officially before the start of Mobile World Congress, on Feb. 21, according to the latest reports. Some earlier reports had said it might be announced earlier, in January, to help in its competitive, unending battle against Apple and next year's versions of the iPhone.

"Competition is good in the mobile chip market because it means increased innovation and lower prices," Moorhead said.

How the S7 helps Samsung, or not

Samsung is losing market share globally and Moorhead said it will probably continue to lose share over the next few years.

"They need help in connecting the dots between the capabilities of technology and what people want," he said. "Curved screens, as in the Galaxy S6 Edge, are cool, but didn't solve a user problem. I give them credit for putting in some technology like wireless charging."

In addition to needing to better match customer needs with technology, Moorhead said Samsung needs more consistent marketing of its products that resonates with consumers. "They are a very inconsistent [marketing] company that makes Apple look like a very safe choice," he said. "Apple is very consistent."