Veritas is holding its first annual partner conference in Macau, China, and laid out its vision for the data management industry. 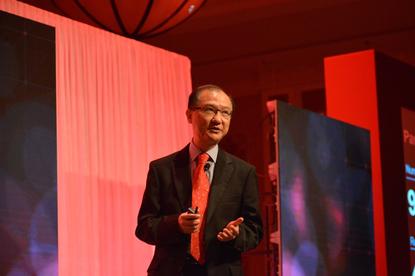 The company is very much placing its focus on the channel, limiting its direct sales, and will be more selective about who it chooses to push its agenda, Wong said.

"If we look back to the first half of this year, 96 per cent of our business was conducted through partners. In addition, the profit margin was a massive 4.5 per cent of our revenue back to our partners."

Now that Veritas has completed its separation from Symantec, and will operate as an independent private entity, Wong says it has the opportunity to boost its agility and become much more focused.

He was joined onstage by Chris Lin, Veritas' APJ sales leader, who continued to lay out Veritas' value proposition.

"The market we are addressing is a $15bn market, growing at a rate of about 9 per cent," he said.

"Our company is a very financially strong company, our business is around $2.5-2.6 billion dollars, and we are a very profitable company, with strong cashflow.

Much has been made of statistics about the growth of data, particularly research that suggests that today's data load is 4 zettabytes, which will grow to 44 zettabytes by 2020 - a 10 fold increase.

Veritas CEO Bill Coleman appeared via video, where he discussed his reasons for joining the company.

"This is a $2.5 billion dollar business, with 31 per cent EBITDA, looking to 35 per cent over the next year. We have $700 million free cashflow for operations."

Lin said the new mission statement is to "harness the power of information, regardless of where it resides by driving availability and revealing insights."

Essentially the precis is that data does not equal useful information. He said that over the last four to five years, approximately 50-60 per cent of all data companies hold is not used - regardless of whether it has any value or not. Most companies hoard this data figuring they can find a use for it later, whether that is Big Data insights, or other forms of analytics. Oftentimes, customers simply hold the data because they are scared, they don't know what is duplicate, who owns what piece of data, or what their legal requirements are - so it gets hoarded.

The company wants to split its business model to suit - one concerns "information availability" which is essentially Veritas' infrastructure input - whether that's hardware, software or Cloud implementations. The idea is that there is "no downtime" and that data, wherever it is stored can be accessed quickly and effectively.

Once that has been determined, whether legacy or looking forward, then the Information Insight aspect can be utilised. That is, figuring out how to monetise the value within your stored data. Whether that be through raised efficiencies, cost savings or building profitability through new applications - such as retail pattern recognition.

Wong said that the channel will be a vital part of how Veritas goes to market.

"We need to think, how can we play this together? But we can't just keep approaching opportunities in the same old way.

"The market is moving in a brand new way. Yes we will continue to sell our traditional products in the traditional way. But I see a much bigger opportunity for us to deliver better value to our existing customers, by using better technology that provides better information, better availability, and better insight."

Allan Swann is attending Veritas' Partner Link Conference 2015 as a media/analyst guest of the company.