​Ericsson and Cisco - Playing for keeps?

"Is this a very special partnership, or a stop gap precursor to a merger?” 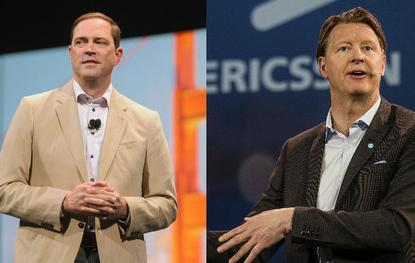 A random observation maybe, but according to Mendler, this was a sport that Ericsson CEO Hans Vestberg once considered for an alternative career.

“Making a swift attack from a defensive position exploits the gaps a competitor has made in a rapid advance,” adds Mendler, building up to a key point regarding the recent Ericsson and Cisco strategic alliance.

As reported by Reseller News, Cisco has joined forces with Ericsson, as the tech giants bid to create the networks of the future in a projected billion-dollar sales opportunity.

For both organisations, when examining the current state of the market, the main competitors are aggressive vendor Huawei, and resurgent Nokia, whose recent merger with Alcatel-Lucent has created a dangerous entity.

“Yet after an avowed 13-month gestation period, Ericsson and Cisco can’t be said to have acted swiftly.

“Unpicked, the alliance reveals modest (although achievable) ambitions: Ericsson and Cisco’s new partnership is expected to produce $1 billion for each in net new revenues by 2018 - and achieve about $115 million (SEK 1 billion) in savings.”

For Mendler, when delving deeper into the deal, this will be done by Ericsson reselling Cisco networking equipment, Cisco promoting and taking advantage of Ericsson’s managed services expertise and the implementation of cross-patent licensing.

Throw in the mining of each others’ customer bases in service provider and enterprise and the leveraging of respective channel partners and the finer details of the deal start to become clearer.

“The biggest message both firms want to push is the alliance’s end-to-end benefits for service providers,” Mendler states.

“In the longer term, the two companies aim to create a unified network management system able to control equipment from both companies.

But as Mendler puts it, can a primary message of a one-stop-shop offering quality and convenience be enough to woo a customer base itself under heavy attack?

“Ericsson’s core customer base is shrinking,” she adds.

According to Ovum’s World Telecoms Financial Benchmarks, the world’s top 45 operator groups have delivered average revenue growth of less than two percent for the past eight quarters.

Telco capex has peaked - capital intensity reached a six-year high of 19.1 percent mid year, but Ovum predicts it won’t last as LTE rollouts complete. Although hyped, 5G is still some way off.

“So what else will service providers spend on?” Mendler questions.

“One target for the Ericsson-Cisco alliance is the march of virtualisation - the ongoing investment in software-defined networking and network functions virtualisation that is transforming IT and telecom infrastructure.”

However, as Mendler puts it, “virtualisation will shift, rather than grow expenditure”.

Ovum’s NFV forecasts indicate that total NFV vendor revenues will reach $750 million during 2018, of which Cisco and Ericsson will claim some, but not all of the market.

In fact, telco NFV spend is likely to be a very small percentage of CAPEX, close to two percent during 2019 according to Ovum’s CAPEX and NFV forecasts.

Huawei and Nokia also target these areas, with the benefit of an already integrated portfolio and one company to deal with.

For Mendler, the future race is dependent on software, end-to-end and services skills, areas in which all three “Tier-0” vendors are investing and jostling for position.

“History shows that it is not the best technology or operational processes that tend to win vendor battles, but tawdry issues of money,” she adds.

Also, the willingness to share risk and reward particularly for brand new service lines (like cloud and IoT) is influencing some deals and changing long-held telco-vendor relationships.

Not least, Mendler insists that Ericsson and Cisco shouldn’t ignore their enterprise opportunity.

“Both mention the enterprise market as a secondary target from their alliance,” she adds. “Admittedly, individual contract values are smaller, but unlike service providers, client numbers continue to grow.

“Not least, neither of Ericsson and Cisco’s major telco-focused competitors can claim strong or differentiated positions in the global enterprise market.

“That said, the allies can’t ignore the new dual persona HP, VMWare or Oracle, among others.”

At present, Mendler says an analogy exists in how telcos have fared targeting multinational corporates (MNCs).

In this segment, intense competition has polarised telcos’ resources and created what is effectively a zero-sum game.

“Defections between service providers are rare and hard fought,” she adds.

“Meanwhile, as telcos duke it out for big enterprise accounts, the ICT needs of smaller enterprises are growing, and proving very attractive to a number of nimbler digital service providers.”

So, Mendler asks, what is the new alliance’s true ambition: Defence or attack?

The promotional language echoes - almost to the word - what Alcatel-Lucent said in 2006 about its merger: “[It] creates new growth opportunities and identifies annual pre-tax cost synergies of approximately Euro 1.4 billion (then $1.7 billion) within three years.”

“So, is this a very special partnership, or a stop gap precursor to a merger?” Mendler asks.

“Either way, more needs to be said to sustain attention in a jaded and stressed market.”

Ovum is the no.1 telecommunications research provider across the world.