Hundreds pack in for a first look 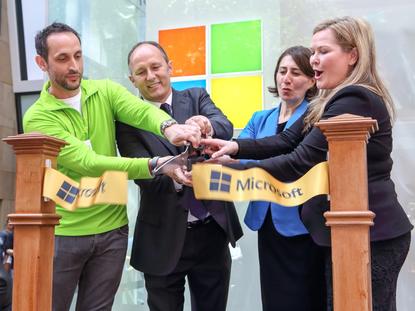 Microsoft has opened its new flagship store in Sydney, the first outside of North America, with some pomp and circumstance, to a big crowd of several thousand - some of whom had been queueing since 6.15pm the night before.

Some were Microsoft fanboys and fan girls, others wanted tickets to an exclusive concert with Jessie J at the State Theatre - the first 750 customers through the door got two complimentary tickets, and some were just plain curious.

The store joins the Apple and Samsung stores and major IT retail outlets in the central Sydney block. They are all close enough to one another to be friends - and competitors.

Dominic Tresize, 20, was the first in queue at the store opening in Sydney. Tresize had been camping overnight outside the store from 6.15pm the day before launch. Tresize travelled from Canberra to Sydney for the official opening.

"It's the first time that Microsoft is opening outside of the US and I want to be a part of that. I obviously love them. I could have come in a week but it's not the same as being here on the first day, as the first person in line," he told ARN.

"The longest I've ever been in line is 10 minutes for a game so this is a different experience for me but it's worth every minute of the wait. The people here are so hyped up and they're also Microsoft fans so we've exchanged some notes on our product knowledge. I also got to meet some Microsoft executives."

Tresize is the first to own the Microsoft Band 2. He's also browsed through the Surface Pro 4 and Surface Book as a potential update to his current device. As an avid fanboy of Microsoft's products, Tresize has an array of Microsoft branded devices.

He also indicated that he has got an eye on the Microsoft Lumia 950 XL smartphone.

"I might replace my current phone and I need a new Surface as well. But I'm definitely in queue for the Microsoft Band 2. I love Microsoft. I've been using devices from the brand since I was 10 years old and don't intend to stop."

In addition to the Surface Pro 3 that he currently has, Tresize also owns two Xbox Ones (he got one from being the first in line at the official store opening) and his laptop and desktop both run on Windows as well.

Check out ARN's full pictorial reveal of the store with all the details of how it measures up, what it offers and the services customers can expect.

To celebrate the opening of the Sydney flagship store, Microsoft will donate a total of $4.8 million in software and technology grants to 11 not-for-profit organisations making a difference in Sydney, and across Australia. Recipients include The Smith family, Mission Australia, Service to Youth Council, Museum of Applied Arts and Sciences, YMCA, YWCA, United Way, Reach, Girls & Boys Brigade, WAYS Youth Services and AIESEC.