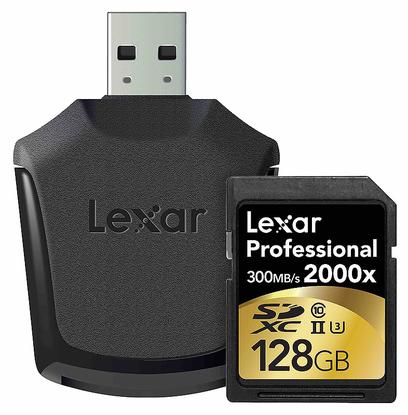 The new card joins the already available 32GB and 64GB cards. Lexar claims it will be the fastest UHS-II memory card available at this capacity on the market.

According to Lexar, the new 128GB capacity card offers read transfer speeds up to 300MB per second and write speeds up to 260MB per second. Additionally, the Professional 2000x SDXC UHS-II card includes an SD UHS-II reader for high-speed file transfer of photos and videos from the card to any PC or Mac system.

Micron Consumer Products Group Marketing Manager APAC Mathew Luu said, “By delivering the fastest SDXC memory card with the highest capacity available on the market, Lexar is focused on providing professional videographers and photographers with the necessary tools to perform at new levels.

"Demand for cinematography-grade video and images requires the ability to shoot, store, and transfer more content than ever on a single card.”

The Lexar Professional 2000x SDXC UHS-II card is backwards compatible with older cameras and readers, performing at UHS-I and Class 10 speeds. It comes with a limited lifetime warranty and includes a lifetime copy of Image Rescue software.