BlackBerry has officially announced and revealed images of the PRIV, its first security-focused Android smartphone. 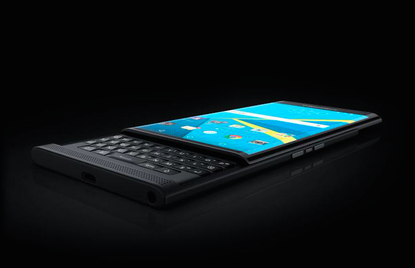 BlackBerry has officially announced and revealed images of the PRIV, its first security-focused Android smartphone.

Posted on Inside BlackBerry, the company released images of the device, which is due to be released before the end of the year.

According to BlackBerry CEO John Chen, PRIV stands for “privacy and privilege” and will be the company’s first product to run the Android OS.

The release of the smartphone will mark an epic shift in the company’s future as it makes the separation from using its own Operating System - it seems after spending years trying to fight against the Android platform, BlackBerry will now embrace the platform.

The failing tech giant is also hoping to capitalise on Android users who may have been longing for an android device with a full QWERTY keyboard, without sacrificing app choices;

“Because it’s powered by Android, PRIV will also deliver the largest choice in apps and the most secure experience possible to the widest audience," the blog explains.

"PRIV users will enjoy choice, innovation, security, privacy and productivity. In other words, no compromises."

The device is said to have a 5.5” curved display and a slider keyboard with the smartphone maker looking to regain some of its original business customers who have since moved to Apple, Samsung and Microsoft.

Chen put this down to the phone being a demo unit and all issues should be resolved before release.

With the release of the PRIV, do you think Blackberry can strike the balance of productivity, security and play? Let us know your thoughts in the comments section below