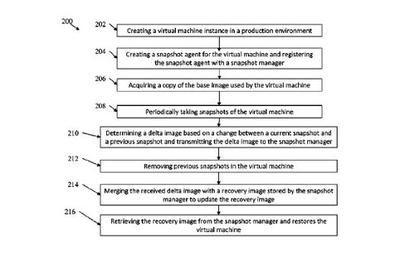 Among IBM's cloud patents is one for assuring high availability through the frequent replication of virtual machines.

IBM may be leading the pack when it comes to putting away patents related to cloud technologies.

In the past 18 months, the U.S. Patent and Trademark Office has issued more 1,200 patents to IBM related to the cloud, with 400 of those issued so far in 2015, according to an IBM tally released Friday.

For IBM, adding to its intellectual property is key to ensuring that the company will be a major player in the cloud market for years to come, said David Kaminsky, chief patent innovation architect for IBM software.

With a fat cloud patent portfolio, IBM is less likely to be blocked from selling the most up-to-date offerings due to a competing company asserting patent claims.

"We can always counter with our own patents to keep the market open," Kaminsky said.

The patents cover a range of technologies for the cloud, particularly those that help make enterprise-level computing services more reliable and secure, Kaminsky said.

Patent No. 9,015,164, for instance, issued in April, describes a way to make a cloud service much more reliable. The technique involves taking frequent snapshots of a running virtual machine. Should the server on which the virtual machine is running crash, the cloud service can quickly switch to the latest snapshot, minimizing or eliminating downtime.

Other IBM patents tackle the challenges in securing cloud services.

Patent No. 8,984,132 describes a way to separate secure data from routine data, so the secure data can be deployed on appropriately hardened servers. Patent No. 8,990,950 provides a technique for controlling access for distributed data with more granularity than current systems offer.

Kaminsky wouldn't say how, or if, IBM will roll these technologies into its own cloud services.

Nonetheless, "the areas of innovations that we demonstrated in these patents are things that are important to the ideal cloud," Kaminsky said.

IBM commands about 7 percent of the market for cloud services, trailing Microsoft with 10 percent and Amazon Web Services with 28 percent, according to research conducted in the last quarter of 2014 by analyst firm Synergy.

For the past 22 years, IBM has received more patents than any other company. In 2014, it was awarded 7,534 patents. For comparison, in 2014, Microsoft was awarded 2,829 patents and Amazon garnered 745, according to the IFI CLAIMS patent service.

"We know we have the largest patent portfolio. We don't worry about who comes in second," Kaminsky said.