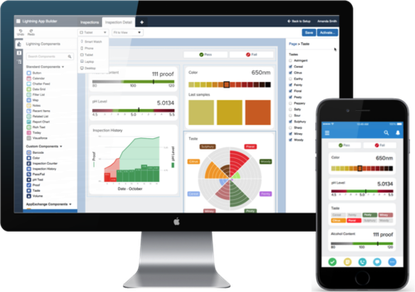 Mobile apps now figure almost as prominently in enterprises as they do in the consumer world, and on Tuesday Salesforce rolled out some new DIY tools that aim to help business users "roll their own" apps as needs arise.

A tech-savvy generation of users seeking ways to improve their personal or team productivity quickly are driving a "build your own app" trend, said Maureen Fleming, a program vice president with IDC.

Rather than making end-users wait for developers to code apps from scratch, Salesforce's component-based approach allows any business user to create an app much the way one would snap together Lego blocks, the company said.

The JavaScript-based Lightning Components can be put together in various combinations, and they range in complexity from single UI elements to microservices with embedded data and logic. Examples of components include e-signature, compensation calculators, maps, calendars, buttons and number entry forms.

The Lightning App Builder, meanwhile, offers a drag-and-drop interface for putting those components together. The components are pre-installed in the App Builder, but partner components can be integrated directly from the company's new AppExchange for Components, which was also introduced Tuesday.

Most enterprises have hundreds of custom PC applications but only a handful of custom mobile applications, said Bob O'Donnell, founder and chief analyst at TECHnalysis Research.

Skills are at least part of the reason, O'Donnell suggested: "A lot of organizations don't have in-house programmers familiar with writing apps for iOS, Android and other mobile platforms -- most of their skill sets are around Windows," he said.

"Enterprises will need to adopt some processes and testing to ensure the safe use" of the build-your-own-applications, she said.

Salesforce1 Lightning Components and App Builder are generally available with the current release of Salesforce and are included in all CRM and Force.com admin licenses. The AppExchange for Components is live and available for public access. Partner components on the AppExchange are priced individually on a per-user or per-Salesforce-instance basis.