An integrated experience could be on the way 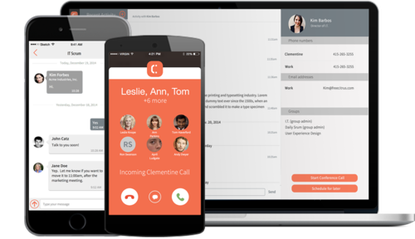 Dropbox took in a fresh infusion of team-collaboration technology and talent on Wednesday with the acquisition of San Francisco-based Clementine.

Clementine's mobile software, which was launched last fall with backing from investors including Homebrew Ventures and Redpoint Ventures, offers conference calls along with voice service and text messaging for work without the use of personal phone numbers.

As a result of the acquisition, the Clementine service will shut down. The free portions of its app will remain active for current users until Aug. 31, it said.

"Dropbox wants to be a player in the enterprise collaboration space, and I think they believe that they need to do more than synchronize files across devices," said T.J. Keitt, a senior analyst with Forrester.

Toward that end, the company is looking for logical adjacent areas that will allow it to expand on that core capability.

One such "adjacency" led it to the Dropbox badge, Keitt noted; now, the belief that it needs a real-time communication capability has led it to Clementine.

The acquisition involves both technology and talent, he noted. Very likely, Dropbox will use the Clementine team to figure out how to create a new collaborative experience around the files stored in Dropbox's cloud, he predicted.

"Given what Clementine was, we can expect that to be a highly integrated experience that may include voice services in addition to text messaging," Keitt said. "It will be very interesting to see what the combined Dropbox and Clementine teams cook up."

Dropbox needed to diversify into this arena, agreed Vanessa Thompson, a research director with IDC.