The Upload: Your tech news briefing for Wednesday, July 22 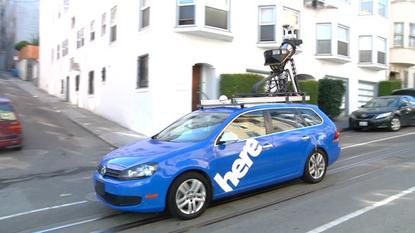 Carmakers emerge winners in the bidding for Nokia Here

Nokia's much-sought-after mapping assets, called Here, have apparently been won by a coalition of carmakers. Audi, BMW and Daimler will jointly purchase Nokia's Here digital mapping service for roughly $2.7 billion, and they plan to invite other auto makers to take a stake in the company as well, multiple reports said on Tuesday. Uber reportedly dropped out of the bidding several weeks ago.

Cars will have to be much better protected against hacking and new privacy standards will govern data collected from vehicles under proposed legislation introduced in the U.S. Senate on Tuesday. The Security and Privacy in Your Car Act of 2015 seeks to get a step ahead of what is seen by some as one of the next fronts in hacking: connected vehicles, which are always on the Internet and rely on sophisticated computer control systems. It comes not a moment to soon: on Tuesday Wired reported on a wild ride in which hackers showed a writer they could remotely control a Jeep on the highway (more in "Watch now" below).

After the honeymoon, there's always the write-down, and this time it meant a whopping $3.2 billion quarterly loss for Microsoft. The company's first loss in three years was largely the result of a $7.5 billion write-down for its acquisition last year of Nokia's devices and services business. It earned a $4.6 billion profit during the same period a year ago. Meanwhile, Microsoft's quarterly revenue declined more than 5 percent year over year to $22.2 billion.

Apple still won't tell how many Watches it's sold since the device debuted, saying simply that it had a "great start" in a news release accompanying its quarterly financial results. And as usual the company raked in the cash in its third quarter: It made $10.7 billion in profit on $49.6 billion in revenue, compared to profit of $7.7 billion on $37.4 billion in revenue in the same quarter last year.

Chinese mobile phone maker ZTE has a chip on its shoulder about consumers' attitudes that smartphones originating in its home country can't compete with the best in class. It's aiming to redeem that image with the high-end Axon Android phone, which goes on sale in the U.S. in early August with a no-contract price of US$449. It includes a 2560 x 1440 screen, an eight-core Qualcomm Snapdragon 810 processor and 4GB of RAM, all fitted in a sleek metal case with leather on the back cover.

LifeLock said Tuesday it is prepared to defend itself in court after the U.S. Federal Trade Commission filed a fresh lawsuit alleging it has failed to protect its users' data and deceptively advertises its services. The lawsuit contends that LifeLock hasn't complied with a 2010 settlement, when it paid US$12 million in a case brought by the FTC and 35 attorneys general saying it made false claims about what its service could protect consumers against.

A New York judge has ruled that Facebook has no legal standing to challenge the constitutionality of search warrants served on its users, highlighting the limits to online companies' abilities to protect user privacy. Last year, Facebook appealed a court decision requiring it to hand over data, including photos and private messages, relating to 381 user accounts. And it's considering appealing this one: A spokesman said "We continue to believe that overly broad search warrants -- granting the government the ability to keep hundreds of people's account information indefinitely -- are unconstitutional and raise important concerns about the privacy of people's online information."

See hackers remotely operate the steering, transmission and even brakes of a Jeep Cherokee, with a Wired editor inside.

Once considered a dead end in computer science, artificial intelligence has come roaring back, and behind the developments now underway at leading tech companies is an unlikely cabal of conspirators jokingly called the Canadian Mafia; re/code profiles the group.