The message Mozilla hopes to use to retain Firefox users will be, "Privacy, speed and choice from the browser the world trusts." 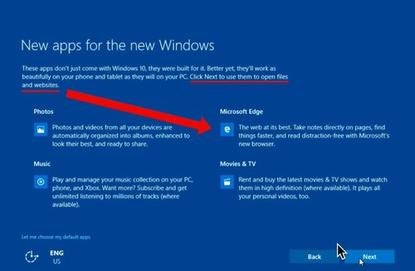 Windows 10's express settings during an upgrade make Edge the default browser, going so far as to switch from Firefox or Chrome, according to a video made by Mozilla in a test of July 2's build 10162.

Mozilla plans a campaign to stop or slow desertions from Firefox to Windows 10's new Edge browser because the OS's express setup changes previous defaults to Edge during an upgrade, according to published documents.

The open-source developer has also revealed its design for the Windows 10 version of Firefox, and has targeted an August or perhaps September release for the browser.

Earlier this month, Mozilla said it would deliver Firefox for Microsoft's new OS "soon" as it revealed it had resumed work on a touch-centric browser that it abandoned in early 2014.

Microsoft will launch Windows 10 in just over a week, with preview testers getting the final build on July 29. Others, including those running Windows 7 or 8.1 who have "reserved" a copy of the free upgrade, will be able to migrate to Windows 10 later, as Microsoft will notify users in waves on a not-yet-specified timetable.

"We don't know exactly what the [Windows 10] update trajectory will look like," Mozilla said in one document. "Our goal is that when Windows 10 releases start to go out, Firefox will work well on Windows 10."

But Mozilla will not make it in time to launch Firefox simultaneously with Windows 10, although it could come close. According to publicly posted information, Mozilla is shooting to support Windows 10 with either Firefox 40 -- slated to ship Aug. 11 -- or Firefox 41, which now has a Sept. 21 launch.

The more likely candidate seems to be Firefox 40. Not only did Mozilla release a beta of that version more than two weeks ago with support for Windows 10 on the desktop and on tablets, but other documents have hinted that 40 will be it. "Major design and product updates are targeting Firefox 40, to be released on August 11," another Mozilla planning document stated.

Earlier this month, Mozilla published design specifications for Firefox UI (user interface) on Windows 10. That UI looks very similar to current Firefox editions on other platforms, including Windows 8 and OS X, and will, like Edge, offer "light" and "dark" themes to match the operating system's options.

Yet another planning piece posted by Mozilla outlined the goals of the messages it will deliver to users, and thus the reasons behind the Windows 10 project itself.

The primary goal of that outreach -- Mozilla dubbed it "engagement" -- will be to "retain Firefox users who upgrade to Windows 10," while the secondary aim will be to "acquire IE and Edge users."

Mozilla pointed out the peril of Windows 10 sans a Firefox version specific to the new operating system. "More than 70% of our user base will be eligible for the free Windows 10 upgrade on desktop," Mozilla said. "After the upgrade occurs, users will be exposed to messaging encouraging them to switch to the Edge browser. This poses a retention threat for Firefox.

"The introduction of Edge also creates prospective acquisition opportunities. Upgrading to Windows 10 will create change/friction. We should leverage that moment to put Firefox top of mind," the firm added.

Edge, introduced in Windows 10, will be the default browser out of the box. In fact, according to Mozilla -- supported by a video that showed what happened when Windows 7 was upgraded to Windows 10's build 10162 of July 2 -- those who upgrade by selecting "Express Settings," as most do, will find Edge the default even if they had previously specified a competitor like Firefox or Google's Chrome.

Users who accept the express setting for Edge must later -- the first time they click on a link -- confirm Edge as the default. Few may refuse to do so since Microsoft's browser is at the top of the installed-browser list and uses the phrase "Keep using this app" for Edge but a generic "Other options" for rivals.

Microsoft's move could easily pose a major problem for Mozilla, which needs to hang onto every Firefox user it has: While Firefox's user share has stabilized around 12% of all browsers worldwide in 2015 -- ending June with 12.1% -- the browser's share is now about half what it was two years ago.

Mozilla plans to create several Web display advertisements to keep Firefox users in its fold, and also will produce a how-to for those who have adopted Windows 10 -- and thus Edge -- which shows them the steps necessary to revert to Firefox as the OS's default.

The bare-bones message Mozilla hopes to use to retain Firefox users will be, "Privacy, speed and choice from the browser the world trusts. Designed for Windows 10." According to the plan, Mozilla will stress that "Firefox is a great browser for Windows 10 users" rather than "sell[ing] ourselves as better than Edge."