US Defense Secretary to renew call for cooperation with tech industry 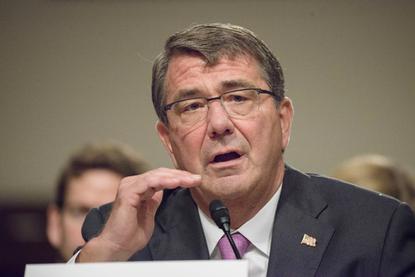 Secretary of Defense Ashton B. Carter testifies before the U.S. Senate Committee on Armed Services' hearing discussing Counter-ISIL (Islamic State of Iraq and the Levant) Strategy, on Capitol Hill, July 7, 2015.

U.S. Secretary of Defense Ash Carter will renew his appeal to businesses to work more closely with the military on Thursday when he speaks to an audience of top executives at the Sun Valley conference in Idaho.

The event is put on by investment bank Allen & Co. and usually attended by a host of big-name CEOs. Among the executives expected this year are Apple's Tim Cook, Facebook's Mark Zuckerberg, Amazon's Jeff Bezos and Tesla's Elon Musk.

Carter's appearance at the secretive conference will be closed to media, but the DOD said he will speak about "the importance of a strong partnership between private sector innovators and government."

Carter has already spoken about the issue, at Stanford University in April, when he acknowledged that disclosures by former National Security Agency contractor Edward Snowden [cq] had led to a decline in trust of the military. "I believe we must renew the bonds of trust and rebuild the bridge between the Pentagon and Silicon Valley," he said at the time.

The DOD's overture to tech execs is largely driven by necessity. While the U.S. military is one of the world's largest and best-funded fighting forces, it can't always attract the same level of talent that heads to private companies, and that's why Carter wants more cooperation.

"Because we have different missions and different perspectives, sometimes we're going to disagree, but I think that's OK," he said at Stanford. "Being able to address tensions through our partnership is much better than not speaking at all."

As part of his goal, the DOD this week launched its Defense Innovation Unit Experimental at Moffett Field, a federal airfield and research park in Mountain View, a stone's throw from the headquarters of Google, LinkedIn and Yahoo. It's charged with "creating an experimental Silicon Valley partnership to strengthen and build new tech-sector relationships," according to the DOD.

It's unclear how well Carter's message will be received at his Sun Valley appearance on Thursday.

Two years after the first of the Snowden revelations, the government's relationship with the tech industry remains strained. Nowhere was that clearer than in February, when President Obama held a cybersecurity summit at the same university where Carter spoke. Google's Larry Page and Eric Schmidt, Yahoo CEO Marissa Mayer and Zuckerberg were all invited but turned the president down.

The two sides have clashed this week on encryption. The government wants encryption keys so that law enforcement and spy agencies can eavesdrop on secure communications if needed, but the tech industry is pushing back against the plan. The government has argued that greater use of encryption hampers its efforts to keep the U.S. safe, but technologists say providing a master key would fundamentally weaken any encryption system.