The Upload: Your tech news briefing for Friday, July 3 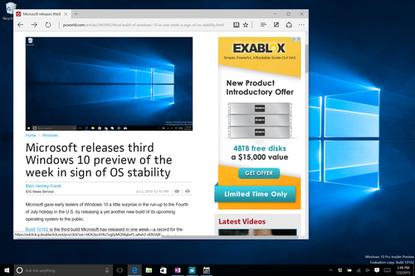 Microsoft has released three more preview builds of Windows 10 in under a week, cranking up the pace as the final release date, July 29, approaches. PC World tested the latest build and pronounced it close to finished.

Renée James is quitting as president of Intel. She plans to take a CEO role at another company, something she says she's wanted to do ever since being passed over for the top job at Intel in 2013. Losing a woman in such a senior role won't help Intel's diversity statistics. The company has been trying to improve its image in that respect ever since initially backing the wrong side in the Gamergate controversy, and recently announced a $125 million fund to invest in startups run by women.

Kyocera deal may give Microsoft license to print money

Microsoft doesn't make Android phones, but it makes significant money from them: Samsung Electronics paid it more than $1 billion from July 2012 to June 2013 as part of a patent licensing deal including technology used in its Android phones. Now Kyocera, a company better known for its printers and copiers, has joined the ranks of companies licensing Microsoft patents for their Android phones. Microsoft sued Kyocera earlier this year, but the companies have buried the hatchet and struck a patent cross-licensing deal on undisclosed terms.

Yahoo is playing the field in search of a new search partner. Barely three months after renewing its vows with Microsoft, the company is now hooking up with Google and other companies to provide search results, Computerworld reports.

Cisco leaves key to all its Unified CDM systems under doormat

If you use Cisco Systems' Unified Communications Domain Manager, it's time to get patching. The company has revealed that the software contains a hard-coded account with root privileges and a static password that can't be deleted or changed without breaking things. Applying the patch released this week is the only way to protect the system.

Watchdog group Fix the Court is concerned that two U.S. Supreme Court justices owned stock in tech vendors or other companies that filed briefs in cases under review by the high court in the past year. Fix the Court wants them follow presidents, presidential candidates and many members of Congress in placing their securities into blind trusts.

Uber throws in the towel in battle with French taxi drivers

Uber has been disrupting transportation around the world -- nowhere more so than in Paris, where taxi drivers blocked access to highways and airports. But After a week of sometimes violent confrontations with the taxi drivers across France, Uber is suspending its UberPop service linking passengers with unlicensed drivers in the country. Taxi drivers say Uber's service breaches a new law that entered effect on Jan. 1; Uber says it will now wait for the Constitutional Court to determine the validity of that law in a ruling expected by Sept. 30, The Verge reports.

In The Wrap this week, a SpaceX rocket explodes, Google's self-driving cars hit the streets of Mountain View, and Prince shakes up music streaming.

The Intercept has released a new batch of documents detailing the capabilities of the U.S. National Security Agency's XKEYSCORE online surveillance tool, which the publication describes as "NSA's Google for the world's private communications." It's been two years since the tool's existence was revealed, but its capabilities never cease to amaze. In addition to capturing web traffic, we learn, it can also store VOIP streams including Skype sessions.