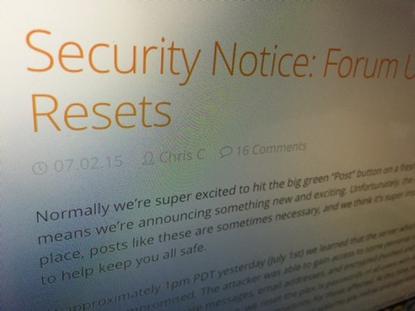 Streaming service Plex has reset some users' passwords after a hacker breached a server hosting its forum and blog.

Video streaming service Plex has reset user passwords after it was breached by a hacker who threatened to release stolen data unless he's paid a ransom.

The company found out on Wednesday that a server hosting its forum and blog had been compromised, Chris Curtis, a Plex support engineer, said in a blog post.

Someone going by the nickname "Savata" claimed responsibility for the breach and threatened to release the data on torrent networks if a ransom wasn't paid in bitcoins.

Savata asked for 9.5 bitcoins (US$2,400) but wrote that the ransom would increase to 14.5 bitcoins if it wasn't paid by Friday, according to a copy of the message posted on Reddit.

"I don't care who the BTC comes from as long as the payment is made: no data will be released," Savata wrote.

Companies often ignore such extortion attempts because it creates an incentive for other cybercriminals to try the same ploy.

Curtis said the passwords were salted, a security measure that makes it harder for hackers to convert them back into plain text. Payment card data was not exposed, he wrote, and Plex had "no reason to believe that any other parts of our system were compromised."

He reminded users they should choose strong, unique passwords for each online service they use. Hackers often try to see if a leaked password will unlock other Web services, since people have a tendency to reuse the same ones.

It is possible to converted encrypted passwords into the original text using password cracking tools. Long and complex passwords, however, are more resistant to cracking since it takes more time and computing power.

Plex's forum will remain offline while the company completes its investigation.