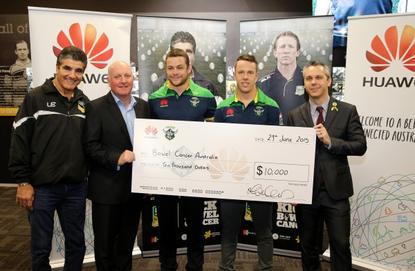 Huawei Australia and the Canberra Raiders get behind Bowel Cancer Australia

The donation was made as part of the NRL Kick Bowel Cancer initiative in support of Bowel Cancer Australia Awareness Month in June.

In addition, 17 match worn player jerseys and one signed by the team and coach, Ricky Stuart, were made available for bidding in an online auction. The jerseys were not available for retail and the auction was the only way fans could secure themselves one.

"NRL and Bowel Cancer Australia have had a great partnership since 2007. In 2011, our players helped launch Bowel Cancer Awareness campaigning and this years’ campaign, NRL Kick Bowel Cancer, is taking the awareness to all new heights,” Fenech said.

Canberra Raiders CEO, Don Furner, said the fundraising was another way the Raiders and Huawei worked together to help raise money for a worthwhile cause.

“The Raiders and Huawei have worked together over the course of our partnership to raise much needed money for charity and only last season a similar concept raised a significant amount of money,” he said.

“We’re delighted to be able to work with the Raiders to raise funds for this important cause,” he added.