Microsoft claims its lens system can improve the Rift's vision 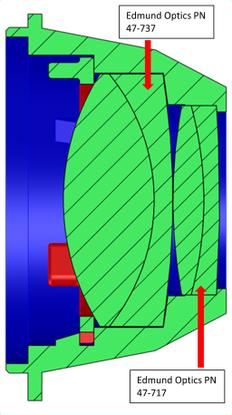 Each lens system could cost around $225 per eye using the lens Microsoft calls for in this diagram.

Microsoft Research has developed a lens system it believes is superior to the one in a developer's version of the Oculus VR Rift headset.

Microsoft said its lens design offers significantly better image quality than the Rift DK2's stock components because its field of view is slightly smaller but sharper and with less chromatic aberration.

In a file that comes with the design plans, Microsoft offered photos that compare a virtual reality scene viewed through both lens systems.

People will need to use a 3D printer to construct the lens casing. Microsoft warned against using "hobbyist" models since they may be unable to properly produce the components that hold the lens in place. Microsoft used a high-end Objet Eden 260 printer and didn't try to print the design on other devices.

Microsoft instructed people to buy lenses with "visible light (VIS) antireflection coating" because without this element "the contrast of the image will be noticeably worse."

An assembly diagram from Microsoft called for specific lens from vendor Edmund Optics.

Going by the prices listed on the company's website, each lens system could cost around US$225 per eye. One of the lens costs $125 and second one sells for $99.50.

Microsoft said its system is built to work with the Unity game engine to correct lens distortion and that the source code may need to be rewritten to work with other game engines.

Microsoft recently said it was working with Oculus to provide components and content for the upcoming consumer version of the Rift. An Xbox One game controller will come with the Rift and the headset will be compatible with Windows 10 and allow people to stream Xbox One games, according to Microsoft and Oculus, which is owned by Facebook.